Hey, was that John Heyer at the gay-bash vigil? 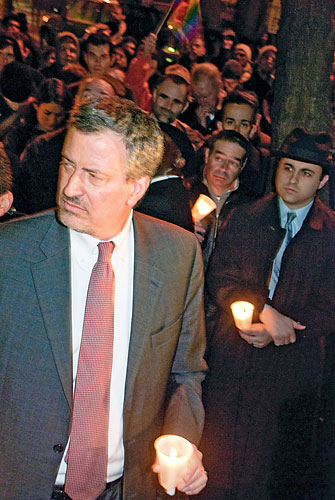 Dozens of residents, including Public Advocate Bill DeBlasio, gathered at a Monday night vigil in Carroll Gardens near the scene of the beating of a gay man two weeks ago.
Community Newspaper Group / Stefano Giovannini

Here’s a crazy little tidbit that fell through the cracks during Monday night’s rally decrying the March 2 gay bashing on Luquer Street.

As every local elected official in the city cried out for justice, standing front and center with a vigil candle in hand was John Heyer.

No one seemed confused by the presence of this longtime Carroll Gardens resident and would-be elected official — even though Heyer is an opponent of gay marriage, a stance that earned him plenty of heat during last year’s run for the Council, a race that ultimately went to gay marriage supporter Brad Lander.

Even more surprising than Heyer’s presence at the anti-hate rally (after all, who likes hate?) was that Heyer somehow managed to get quoted in Lander’s follow-up press release about the rally.

Even zanier was that he somehow managed to insert his pro-life stance — another controversy from last year — to settle the score during in his remarks about the anti-gay attack.

“A central tenet of my religious beliefs is the sanctity of human life,” he said in the press release. “Since I have been personally singled out due to my heritage and religious beliefs, I would never want anyone stigmatized or victimized because of race religion, gender ethnicity or sexual orientation.”