Housing in the park continues to look likely

By The Politicrasher Posted on December 4, 2010 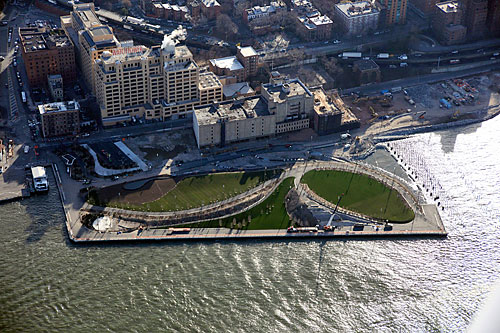 The plan to build luxury housing inside Brooklyn Bridge Park is like the weather — everyone complains about it, but no one does anything about it.

That was the unmistakable conclusion after sitting through the first meeting of the park’s Committee on Alternatives to Housing — which is charged with, as its name suggests, finding a way to alter the current plan to erect revenue-generating residences on Pier 6 and John Street inside the city-controlled, $350-million park.

At the hearing, on Tuesday at Long Island College Hospital, there was the predicatable hue and cry from housing opponents.

“Parks should be open; they aren’t places for people to live — either in high rises or in tents,” said Jerry Armer, former leader of Community Board 6.

A steady stream of speakers demanded that the committee live up to its name and find money for the park’s big maintenance budget that would obviate Mayor Bloomberg’s housing plan.

Park officials argue that housing would replenish the maintenance budget by charging wealthy tenants payments in lieu of taxes — a controversial fee that doesn’t fluctuate like regular property taxes.

But in a small nod to opponents, park officials created the committee, which has a year to find a new cash stream before Bloomberg’s plan goes forward.

There were plenty of ideas on the table at the “ideas session” — some undoable, some unformulated, some dependent on all the political stars aligning. Here’s a roundup:

• Capture tax revenue after some 30 properties in Brooklyn Heights and DUMBO currently owned by the tax-exempt Jehovah’s Witnesses are converted to residential use and sold by the Watchtower Bible and Tract Society as it continues moving operations to upstate Warwick.

“One of the Watchtower properties [at 25 Columbia Heights, adjacent to the Pier 1 portion of the park] should be changed to a hotel — it already looks like one,” said Ben Bankson, president of the Willowtown Association in Brooklyn Heights.

Nice idea, but, as park officials pointed out, purchasing Witnesses buildings could cost millions that the park just doesn’t have.

• Erect a pay-to-play athletics center, like the one on Chelsea Piers in Manhattan. Another interesting idea, except for one thing: No one knows how much money it would generate.

• Charge a one-percent surcharge — or institute a $25 annual Brooklyn Bridge Park maintenance fee — to every homeowner in the borough. That’s another progressive idea, but raising taxes in a recession is about as popular politically as friending Charlie Rangel on Facebook right now.

• Follow state Sen. Daniel Squadron’s plan to capture a portion of the property taxes on properties adjacent to the park (and as far away as Boerum Hill). Property values on lots in the Squadron zone would rise considerably after the park is complete, so a portion of that money should fund the park maintenance, Squadron believes. Many people like Squadron’s idea, but its fate is unknown.

• Build a world-class Governors Island ferry terminal at Pier 6, with year-round concessions, venues, restaurants and bars. This idea appears to be a Brooklyn knock off of the South Street Seaport — and we all know how well that worked.

In the end, the craziest idea of the night was put forward by legendary real estate broker Chris Havens: Doing what is already slated to be done — the housing.

“What negative impacts do you see at Prospect Park with the multi-million-dollar housing around it?” Havens said.

Nice try, Chris, but three people immediately screamed out the obvious: “That housing isn’t in the park!” Now this is a park, say opponents of housing inside the Brooklyn Bridge Park development.
The Brooklyn Paper / Andy Campbell