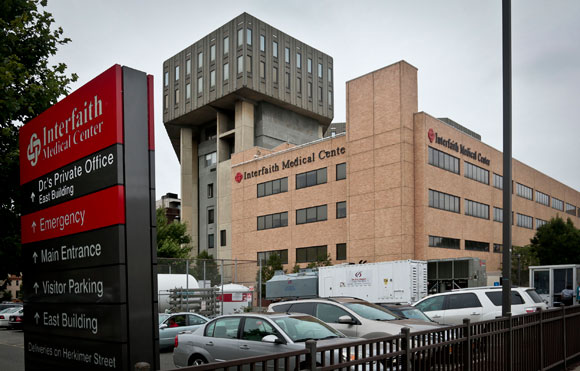 Interfaith Medical Center stopped accepting ambulances for four hours on Friday afternoon because it has not received the $3.5-million the state promised it in late December, an Interfaith spokeswoman said.

The hospital’s chief executive officer sent a letter to the fire department on Friday afternoon asking that it send emergency vehicles somewhere else.

“[Interfaith’s] financial situation has unexpectedly become precarious and we could run out of monies to pay staff and supplies with patients in the hospital before the end of the month. As the CEO, I cannot afford this to happen,” Patrick Sullivan wrote in the letter to the city’s fire chiefs. “Therefore, I must insist that [Emergency Medical Services] immediately put into effect a full ambulance diversion for [Interfaith] to limit future admissions to [Interfaith] in the interest of patient safety.”

The hospital is in a precarious position because it has not received the stopgap cash Gov. Cuomo pledged last month. The money would have tided over the in-the-red hospital through March 7.

The state refused to send the money because the hospital decided to push back the transfer of its clinic patients to Kingsbrook Jewish Medical Center until the rest of the closure plan is clear. The state said that the stipulation put Interfaith in “technical default” of an order handed down by federal bankruptcy court.

“The trustees of the hospital didn’t feel it was in the best interest to give up the clinics on Jan. 26 if were were going to be open until March 7,” Interfaith spokeswoman Melissa Krantz said.

Activists gathered outside the hospital at 6 pm for an emergency protest rally, but dispersed when the emergency room reopened its doors.

The hospital is still in critical condition, despite the momentary reprieve.

“It is our hope that the state will come up with the money it promised in December, hopefully sooner than later, and this will be a four-hour wrinkle,” said Krantz.