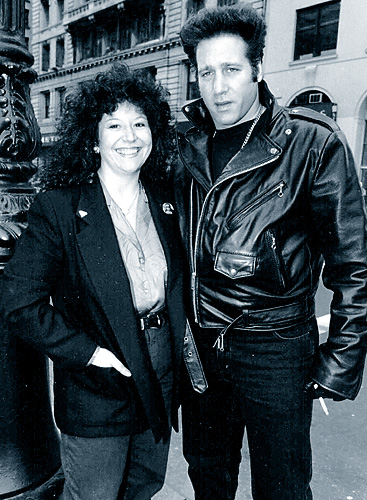 An old friend of mine is trying to make a comeback with a new reality show. The press says he’s full of hate and anger, so I think it is time to tell about another side of Andrew Dice Clay — a side I encountered 28 years ago when he was just starting out.

A little history: My first job was as a reporter for The Brooklyn Paper. One day, my editor, Beverly Cheuvront, came to me with a big smile and said, “I have a great story for you to do. There is this guy who does a John Travolta act. He works in the next building, for his dad, who has a process serving business. His name is Andy Clay Silverstein.”

At the time, in 1979, Andy Clay Silverstein was an unknown — except by everyone on Court Street, and at comedy clubs like Pips, in Sheepshead Bay, where he was constantly refining his act.

He had a big dream and I somehow became the first journalist to share it with the world. My article (below) went like this: “Court Street’s Andy Clay Silverstein is a Jewish John Travolta with a striking resemblance to the star. Looking like Grease’s Danny Zuko and sounding like Kotter’s Vinny Barbarino, he proceeded to dance like Saturday Night Fever’s Tony Manero during a recent photo shoot. … Andy wants to be a star and his Travoltarized talents — and looks — are his temporary claim to fame, he says.”

I was a fan from day one. After I wrote my first article on him — published March 6, 1979 — I would go on to do a couple more. And we became friends, me meeting my deadlines, he filing court papers and dealing with his Dad’s clients.

He would often stop by The Brooklyn Paper office and try to get me out of work so I could walk with him down to the courts where he had to drop off papers. Our publisher, Ed Weintrob, would get annoyed, but I would wiggle out of the office whenever I could to accompany him down to Jay Street. He enjoyed having an audience, and for me, it was a fun break.

Andrew would practice his act everywhere, making things up as he went along. One day, he turned to me — his platonic pal — in an elevator filled with people, and said: “I don’t care if you are pregnant, I’m not marrying you.”

I was mortified, but he stayed in character. I came to expect him to do crazy stuff on the streets and in elevators. I spent much of 1979 red-faced at all the ways he embarrassed me in front of strangers. But I loved it! My girlfriends did, too!

His act back then consisted of coming out on stage as a sniveling, nerdy character, then, lights would dim and he would transform into John Travolta and do “Greased Lighting.” In between were some snarky jokes. I once wrote that he sounded like “a shark who had eaten a pail of Don Rickles jokes.” The crowds loved him, especially in Brooklyn.

I would take a gaggle of girlfriends to see him perform, and we became the original true blue “Andrew Clay” fans. He’d dropped his last name and used his middle name as his stage name. There was no “Dice” yet.

He’d always single out one of us in the audience to be his target. After the show, we would go backstage (if there was one) and meet his dad, mom, sister, aunt, and the whole family.

They would tirelessly trek with him to club after small club, and as the clubs got bigger, they were still there. Much of the Silverstein family life was centered around Andrew’s career in those early years. His dad would manage him — and be his best friend and guiding light — for many years.

Even then, we could see that Andrew had a huge personality that could not be contained, and a softie who was nothing like his act. I realize it was 28 years ago, and time can change people, but I always found him to be “real.” What you see is what you get. The Brooklyn Bravado was an act. He always kissed his father hello. (On his reality show, he kisses his son hello in the same way.) He opened doors for women. And once in a while, he paid for the coffee in the little coffee shop in 16 Court St. (though most of his earnings went into his act, for which he was always purchasing black bell-bottom polyester pants and T-shirts with things spelled out in studs).

Knowing him and his ambition, I wasn’t surprised when, 11 years later, he was hosting “Saturday Night Live,” doing movies, filling arenas. By then he was Andrew “Dice” Clay, a comedy legend in his own time.

I’d seen him over the years a few times since he’d left Brooklyn for Hollywood at 22, but when he was at the height of his fame, I got an assignment from Spin Magazine to profile him.

I went back to meet him at his dad’s office — which had become the office of his production company, Fleebin’ Dabble Productions — and he was still the same Andrew. I really didn’t see a big change in his normal personality. Still funny, unpredictable, regular Andrew. He showed me a new video and said, “You see, I told you I would make it big.”

My photographer and I took him out for a photo shoot in the Streets of Brooklyn where we used to walk in our 20s.

It was truly an unbelievable sight: The streets came alive with fans. Workers hung out from office windows. Bus drivers stopped buses. People swarmed around us. Guys started calling out Dice jokes. Everyone was yelling, “Dice, Dice.” Traffic stood still. It was so crazy the photos ended up in People Magazine and an article about my article ended up in The Brooklyn Paper. He truly had become as famous as he always wanted to be. He was a hero in Brooklyn. It blew me away.

The rest of the story you know: His act got dirtier and Andrew rose to fame almost at the same time that there was a cultural push-back towards political correctness.

Yet the trend Andrew started continues to be milked today, albeit by others like Howard Stern, whose guests take off their clothes and talk about their body parts, and Sarah Silverman, who is basically Dice in a bra. But she’s so cute, she gets away with it.

But back in the day, Andrew Clay Silverstein walked around like Sacha Baron Cohen does today, goofing on everyone and overcoming them with his charm and personality. I notice that Borat, in fact, is the proud sponsor of the Andrew’s show.

When I watched last week, I was a little shocked to see Andrew older and crankier (like me) but he seems like the same old Andrew in many ways. Some critics are carping that Andrew is just trying to stop the clock on his long-expired 15 minutes of fame, but they’re seeing Dice, not Andrew with his Brooklyn-ness intact.