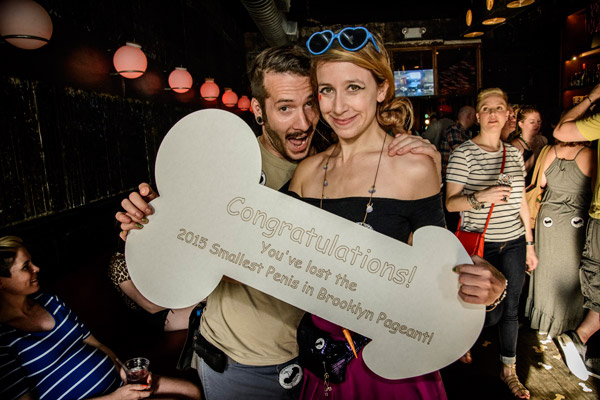 Big loser: Roxy Saba, right, helps Timothy Mahr celebrate the fact that he does not have the world’s smallest penis during Saturday’s grand unveiling.
Photo by Stefano Giovannini

Here is the schlong and short of it.

Men with puny peckers and big personalities took to the stage at the King’s County Saloon in Bushwick on Saturday to compete for the coveted title of the Smallest Penis in Brooklyn.

Five guys and their minuscule members faced off in this year’s pageant, but all the tiny penises in Brooklyn could not best a wee willy from Wisconsin. Taylor Campbell, 24, who competed under the name Puzzlemaster, jetted into Brooklyn just for the competition and flew back to America’s Dairyland with the title and the booty: $500 in cash.

“It has been a weird ride,” said the Puzzlemaster, who came in second-place last year.

Last year, Campbell performed a scene from “The Silence of the Lambs” for the talent portion of the contest. This year, he sang the theme from “Goldfinger,” but changed the title word to “Gold-dinger.” That made all the difference, said Campbell, who has his own comedy YouTube channel.

“They just loved it,” he said.

In addition to the talent portion, the Puzzlemaster and his fellow contestants — Chino Loco, the Gentleman, Cromwell, and Rip Van Dinkle — also went head-to-head in a question and answer segment and a swimsuit competition.

More than 100 spectators crowded into the bar to cheer on the contestants and their petite packages. One fan said she thought the contest was an inch — maybe an inch and a half — forward for body positivity.

“I thought it was great that these guys were confident enough to go up there and do that,” said Anastasia Lewis, who describes herself as a “longtime penis enthusiast.” “It was empowering to them.”