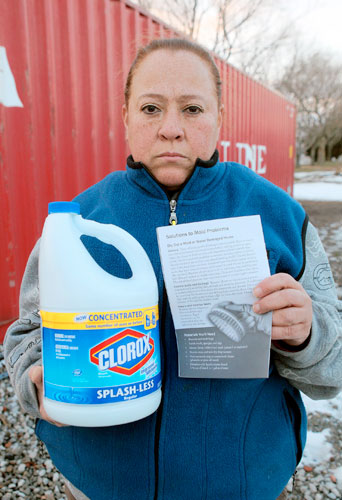 Bad advice: Gerritsen Beach resident Princess Grace said she used bleach to clean her Sandy-damaged home of mold, as per FEMA’s recommendation, and that the high-powered cleaner gave her a headache for a week.
Photo by Steve Solomonson

Government advice to use bleach to clean up mold could leave Gerritsen Beachers in a bad spot, experts say.

The Federal Emergency Management Agency has been handing out fliers in Gerritsen Beach advocating the use of a bleach and water solution to cleanse homes affected by mold, but community activists and mold experts say that method doesn’t really solve the problem and that, come warmer weather, the owners of flood-damaged homes will see the unhealthy blight return.

“About 2,000 homes were severely flooded and of those 2000 homes, 70 percent have only used bleach, vinegar, and water,” said Mike Taylor, president of Gerritsen Beach Cares, a non-profit that’s been leading the charge to restore normalcy to Gerritsen Beach following Hurricane Sandy. “When things warm up, those people are going to have a big problem in the spring.”

The pamphlet tilted, “Mold and Mildew: Cleaning Up Your Flood Damaged Home,” which FEMA has been circulating throughout Gerritsen Beach and other affected neighborhoods, advises resident’s with water-damaged properties to clean affected surfaces with a “non-ammonia soap, or commercial cleaner,” before disinfecting it with a chlorine bleach solution of “one-and-one-half-cup bleach per one-gallon-of-water.”

The bleach will indeed knock out the mold that has already grown on the soggy portions of a flooded-out home, but it does nothing to kill the hardy spores that have burrowed deep into the wooden framework, say experts, leaving residents facing potentially serious health and financial risks later on due to recurring mold that can harm residents’ health and home resale values.

“Bleach is 90-percent water, so you’re adding a harsh chemical and another moisture source for the mold, which takes the color out, but leaves the mold to grow,” said Justin Hopkins, who has been doing regulated mold remediation for five years for US Fire and Water Restoration. “You’re actually adding moisture to it, so it smells fresh and clean, but you still have a mold growth problem.”

Despite the FEMA recommendation, bleach is not recognized as an anti-fungal biocide by the Environmental Protection Agency and cannot be relied on to penetrate wood and kill mold spores.

“Here’s the funny thing, if you go to Clorox’s website it doesn’t say anything about bleach killing mold,” said Hopkins. “If it did kill mold, they would put it on there, wouldn’t you think?”

Just like people, mold tends to flourish in the warm, humid conditions that come with the Spring, meaning that many people who assumed they had cleaned the mold from their houses over the winter will eventually find that it was only waiting for warmer weather.

“Mold lives in the same environment we do, which is going to be your typical spring weather,” Hopkins explained. “It likes warm and moist, not dry and cold. So everything’s going to be minimized now, but come spring it’s going to really take off.”

Mold can cause hay fever-type symptoms like sneezing, runny nose, red eyes, and even rashes in people with allergies and poor immune-systems. It can also trigger attacks in people with asthma, and even irritate the nose and lungs of those without allergies.

Even worse, however, in a case of the cure being worse than the disease, fumes from the bleach itself can cause irritation, as gloriously named Gerritsen Beach resident Princess Grace discovered when she was cleaning up after six feet of water flooded her basement.

“I got sick from the bleach, the smell was so strong,” Grace complained. “I had a throbbing headache for a week.”

But she thought she had no alternative to enduring the noxious fumes, given the advice in the government pamphlet. “FEMA said we need to use bleach so we can avoid the mold,” said Grace. “I used a lot of bleach.”

To be fair, the FEMA pamphlet does say that if more than 25 square feet need to be cleaned, homeowners should hire a contractor, but local advocates say that caveat makes the bleaching advice not just ineffective and possibly dangerous, but also entirely irrelevant.

“FEMA’s own literature says bleach is not for a problem bigger than 25-square-feet, so why hand it out in neighborhoods where the flooding is more severe?” asked Steve Barrison, president of the Bay Improvement Group, who has been organizing a series of mold education nights throughout southern Brooklyn.

“I’m not sure why they’re not handing out literature that doesn’t apply to our situation,” said Barrison, “and why they can’t come up with something new that is applicable to our flooding, not a little spill in the corner of your basement.”

FEMA declined to comment by press time, saying they needed more time to come up with an answer.

“We’re continuing to work on a response to your inquiry,” said agency spokesman Jim Homstad.

Meanwhile, Gerritsen Beach residents continue to work on cleaning up their homes, unsure whether they might have to do it all over again in the spring.