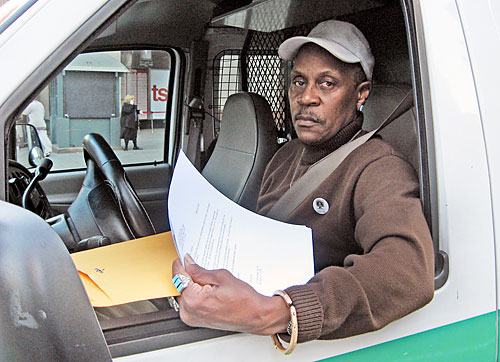 Councilwoman Letitia James is vigorously pursuing her personal injury lawsuit against an itinerant laborer, despite widespread ridicule over her contention that she suffered “permanent” injuries after bumping into the legal trailer hitch on his parked van.

The case remains active on the State Supreme’s Court Web site, despite a Daily News story last week that suggested that she had dropped the case after the newspaper awarded the second-term lawmaker its “Knucklehead Award.”

In fact, James’s attorney, the politically connected Court Street barrister Sanford Rubenstein, said he can’t wait to take this controversial case to a real jury (not merely the court of public opinion that has already ruled against James).

“My client looks forward to a jury hearing the case and making a determination of what damages she’s entitled to,” said Rubenstein, who is most known for his civil rights cases, including defending the seriously injured Abner Louima.

“There is a permanent scar on her leg and she’s also concerned that others can be injured by the dangerous conditions on this vehicle,” he added, referring to James.

The events of July 11 are now notorious in the legal record: James, according to her court filings, claims that she sustained “serious, severe and permanent [injuries] to her limbs and body” after she walked into a four-inch trailer hitch protruding from David Day’s parked car.

But Day maintains that James who negligent for walking into his parked car — and state law states that it is legal for Day to have a trailer hitch on the back of his 1993 Chevy Astro van.

“There is no prohibition against trailer hitches in New York City,” said Department of Motor Vehicles spokesperson Ken Brown. “Individuals are allowed to have the trailer hitches mounted even when not in use.”

Rubenstein said he took the case on merit and will charge his usual fee — a percent of the winnings.

“As in any case, I will work on contingency and a jury will decide the damages,” said Rubenstein.

When reminded that Day makes about one-tenth of James’s $122,500 Council salary, Rubenstein responded that the issue isn’t how much Day makes, but the danger that his protruding trailer hitch is still causing to the general public.

James (D–Fort Greene) has said she will drop the case if Day just takes the hitch off his van — but Day is showing some of his native Texas toughness.

“How you can you go around telling people to remove their livelihood,” said Day in a long southern drawl. “I put the trailer hitch on there with my money in order to make money. It’s what I use to make money — to move my things and to hook a trailer to my van. I would love to take it off and make her happy, but that reasoning is stupid.”

“If they get a law for everyone to remove [hitches], then I’ll gladly remove my trailer hitch,” he added. “If it’s good for one, it’s good for everybody, but it’s totally wrong to tell me to remove mine while millions of people have one on their vehicles.”

James has been silent for a week after telling this newspaper that the hitch caused a seven-inch scar on her leg. She has refused to produce medical records that could back up her claim that she suffered permanent injuries on the eve of her vigorous re-election campaign last year.

James bounced to an easy victory in that race. Additionally, several of James’s Council colleagues told this newspaper that they did not recall James limping or using crutches during the summer.

Day, who was loading items in his van at the time of the accident, admits that James did suffer a scratch that day, but he says the wound was only two inches long and not very deep.

After the accident James used some loud and harsh words, but did not utter any profanities, recalled Day, 61, adding he was brought up to not raise his voice in these types of situations.

“My heart was with her,” said Day, adding he didn’t think anything more of the matter until he received a court summons.

In the days since The Paper’s Web site broke the story, the Councilwoman has been the subject of considerable mockery on the Internet.

“[She is an] idiot who is suing a man because she bumped her shin,” posted “Bob.” “The people who agree with her are part of the problem with New York City.” Councilwoman Letitia James is still waging legal war against David Day after she bumped into his trailer hitch with her leg and suffered “permanent” injuries.
The Brooklyn Paper / Stephen Brown