Jason Richelson and Amy Bennett of the Greene Grape have invented an iPad cash register.
Photo by Stefano Giovannini

A Fort Greene wine shop is crushing the competition — thanks to its innovation in shopkeeping technology.

The couple behind the award-winning Greene Grape and Greene Grape Provisions never dreamed of owning a tech startup, but now they’re transforming home computers and iPads into cash registers, one mom-and-pop at a time.

Last year, owners Jason Richelson and Amy Bennett developed ShopKeep, software that turns a Mac or PC into a cloud-based checkout — meaning stores can record sales and inventory over the web, rather than on in-store servers — thus joining the likes of Google and Apple in the burgeoning field.

The two were inspired to develop the software when their standard server-based cash registers weren’t keeping up with their skyrocketing business. Bennett, a former lawyer, and Richelson, a onetime trader, opened the Greene Grape on Fulton Street in 2004. Within just a few years, the wine store’s aging registers began to go haywire. One day, they had to close up shop after a server crashed and they waited for a software specialist to fix it.

Richelson was so fed up that he designed the web-based checkout system, and hired a programmer to do the dirty work.

“Our frustrations led us to find a better, cheaper way,” said Richelson. “We hope our software helps the little guys keep up with the big guys.”

For $1,000, shopowners can purchase the ShopKeep system — which includes a cash drawer, receipt printer, credit card swiper and the software — plus there’s a $49 monthly subscription to ShopKeep. All told, the couple says is a minor expense compared to traditional register setups that can cost five times as much.

Today, close to 2,000 businesses nationwide use the couple’s technology.

“We just happen to have something the world wants,” said Bennett.

The innovations continue: the store’s latest product is an app for the iPad, so the prized tablet can turn into a sleek touchscreen till. About 70 independent shops nationally are currently piloting the iPad register, including Cochinita Taco in Clinton Hill, Nunu Chocolates in Boerum Hill, and Ample Heights Creamery in Prospect Heights.

Brian Smith, owner of the Vanderbilt Avenue ice cream shop, said that the ShopKeep app is almost too fast and easy to use. In just four days of business, he sold 130 gallons of ice cream and had to close for a week so he could make more.

“The brilliance of it is that you don’t have to be tech savvy,” said Smith. “It was almost part of the problem — the app goes so quickly!” 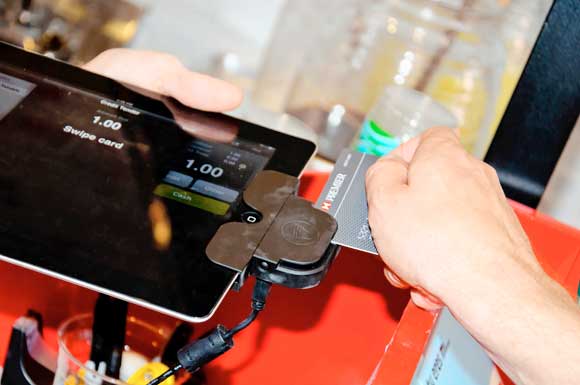 Here it is in use.
Photo by Stefano Giovannini