Op-ed: The city is about to make a real estate deal with public land in Coney Island. Here’s why it’s a mistake. 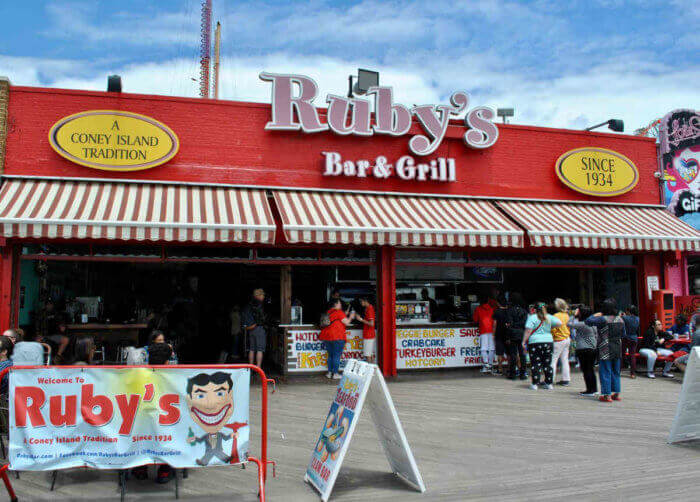 Some boardwalk shops, including Rudy’s Bar and Grill, were granted a 10-year lease extension and rental assistance through 2029 in December of 2021.
File photo by Rose Adams

The largest commercial real estate deal in decades for taxpayer-owned land in Coney Island is about to be made. The deal’s been in the works for well over a year. Potentially hundreds of jobs are on the line. But the local community has been all but left out of the discussions of this deal to be considered by the Brooklyn Borough Board at their Oct. 6 meeting and unless there is last minute movement to change it, an opportunity for the community to benefit from city-owned land will be lost until 2037.

The city purchased seven acres of what is now Coney Island prime amusement district land from Thor Equities in 2009 for $96 million. The NYC Economic Development Corporation manages the land and has rented it to the Central Amusement International corporation, the operators of Luna Park for a percentage of the amusement park’s total revenues since 2011. Central Amusement International’s current lease ends in 2027 but in a last minute deal hashed out at the end of former Councilmember Mark Treyger’s term, the company’s favorable lease could be extended ten years — until 2037.

The local community was left out of the negotiations for the lease extension. The Economic Development Corporation did not release figures of how much rent has been collected from Central Amusement International until a local Community Board meeting last Wednesday, (Sept. 28) when Malia Teske, an Economic Development Corporation official, mentioned that in the last year almost $2 million was collected. That figure amounts to a multi-year multi-million dollar rental subsidy for Central Amusement International.

Local real estate prices have exploded since 2009, with sticker prices on most residential apartments more than doubling in the intervening years. The cap rate for the Economic Development Corporation, the ratio of annual rent to the current value of the land is less than 2%, a monstrously low rate for real estate in New York. To put that figure in perspective, assuming the city sold the land for the same 2009 price and bought ten-year U.S. treasury bonds with the proceeds, with a current 3.9% annualized yield, the city would collect double what it is currently getting from Central Amusement International.

The process produced new undisclosed term sheets which some tenants have said rolled back rent increases and offered lease extensions between the individual boardwalk subtenants and CAI. However, Central Amusement International insisted that the subtenants’ renegotiated leases be made contingent upon the company receiving a 10-year master lease extension from the city.

As it stands now, the Brooklyn Borough Board, chaired by Borough President Antonio Reynoso, has an upcoming meeting on Oct. 6 where a renegotiated lease highly favorable to Central Amusement International will be voted on. The board should vote the deal down because the city should practice responsible stewardship of public assets and the renegotiated lease miserably fails the city’s fiduciary duty. At the very least, the board should recommend that specific conditions be included as part of the borough board’s recommendation on the renegotiated lease terms so that the economically disadvantaged community living around Luna Park can also benefit from the land they collectively own.

All of the rental revenue collected should be redirected toward:

Coney Island residents need expanded job training opportunities, especially in the retail, tourism and hospitality trades. The community lacks employment access as many jobs turnover annually due to their seasonal nature. It’s not enough to fill jobs once. A reliable pipeline for jobs as those referred by the Coney Island Workforce 1 career center must be expanded exponentially with significantly enhanced capacity.

The city has made it part of its mission to attract more visitors to Coney Island to support the regional economy. Substantial effort is invested by the city promoting Coney Island as a destination for the beach, boardwalk and amusement attractions and events. But like clockwork each year the neighborhood is overrun by an onslaught of vehicular congestion frustrating local residents’ ability to get on and off the peninsula. Particularly on event days, residents can lose an extra hour just getting through the streets.

The amusement district benefits from the increase of visitors, while the local neighborhood suffers for it. The neighborhood needs a full-blown Coney Island regional transportation study so the existing street grid and curbside regulations can be used safely, efficiently and effectively to promote mobility and access, optimize on-street parking space turnover and capacity, and support accessible and convenient intermodal travel options promoting alternatives to individual vehicle trips. The study must generate a transportation plan increasing the number of visitors while decreasing the number of individual vehicles used to get to Coney Island.

Without a seat at the table during the negotiations, the community had no opportunity to articulate these needs and influence the city. The current renegotiated lease terms will not give the community another chance to discuss its subsidization of Central Amusement International until 2037. This gigantic municipal real estate deal will lock in an agreement which the community must live with for the next 15 years. While the former Councilmember went to bat for the boardwalk businesses as subtenants of the lease, nobody went to bat for the Coney Island community. There were no public discussions in the community about this deal and the local Community Board did not notify the community about the City Council’s public hearing on it last December.

The people living in Coney Island deserve to benefit directly from the wealth generated by its city-owned properties. Anything less is unacceptable.

Kouichi Shirayanagi is a Coney Island-based copy editor, dad and environmental activist. Craig Hammerman is a former district manager of Brooklyn Community Board 6 and is currently a southern Brooklyn advocate and mindfulness meditation teacher.