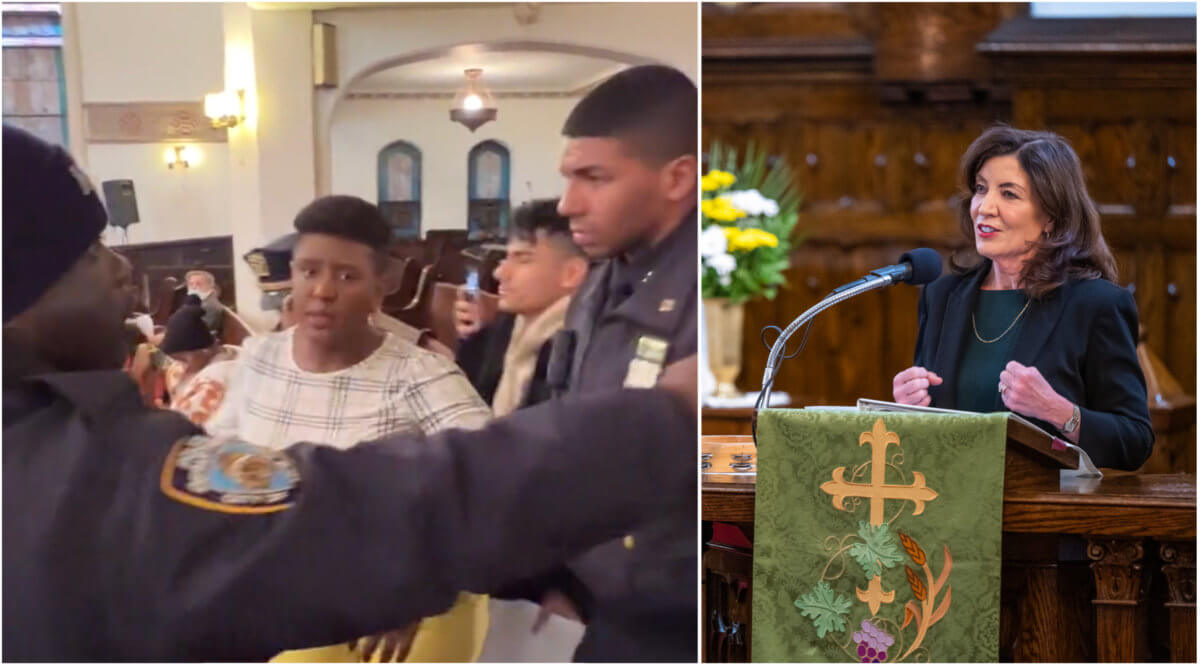 A woman was removed from a Sunset Park church service on Sunday during a visit from Governor Kathy Hochul. The parishioner and housing advocate stood to speak against Hochul’s nomination of Justice Hector LaSalle to the Court of Appeals.
Photos courtesy Housing Justice for All & Darren McGee/Governor Kathy Hochul’s Office

The New York City Police Department removed a parishioner from a Sunset Park church on Sunday when she stood up to speak out against Governor Kathy Hochul’s nominee for chief judge in the state’s Court of Appeals.

Video of the incident shows housing advocate and Trinity Lutheran Church parishioner Genesis Aqunio standing up to address the governor as she advocated for Justice Hector LaSalle, her choice to lead the state’s top court, on Jan. 15 — a day before Martin Luther King Jr. Day.

“I pray that you’ll listen to tenants, and I pray that you withdraw LaSalle and stand with working-class New Yorkers,” Aquino said, standing near the back of the church, as Hochul stepped away from the podium. A voice can be heard calling “Take her out!” as police officers move toward Aquino.

“We need Good Cause Eviction, governor, I pray for you,” Aquino said as she was moved toward the front door.

Hochul spent the weekend visiting churches and community organizations around the city, vouching for LaSalle ahead of a Jan. 18 state Senate Judiciary Committee hearing on his nomination. Gubernatorial court appointees must be confirmed by the body, and LaSalle has come under heavy scrutiny from a number of progressive state Senators and advocates, who cite his pro-life, anti-union history of court decisions as a Supreme Court judge. LaSalle was nominated to the court by then-governor Andrew Cuomo in 2014.

A representative for Hochul said the NYPD arrived at the church before Hochul did on Sunday, and that her team did not give any instructions or recommendations to the police. The governor delivered remarks and issued an MLK Day proclamation to Reverend Samuel Cruz, the spox said. The NYPD did not return request for comment.

Cruz told Brooklyn Paper that it’s tradition in the Protestant church to host political figures on Martin Luther King, Jr. Day. Hochul’s team reached out on Saturday evening asking if she could stop by, and the team agreed. They didn’t speak specifically about what Hochul would say, but political figures of all stripes have visited the church, regardless of whether church leaders agree with their viewpoints.

“Any politician that has come here, always, obviously, slants things … they have agendas, I assume, I’m not naïve,” Cruz said. “What she spoke … was actually a good sermon, everybody was impressed. She spoke about Martin Luther King’s legacy and people’s activism, she’s the first female governor, there’s been social justice struggles for many things.”

The trouble came when she started speaking about LaSalle. Protestors had gathered outside the church ahead of the service, and a number had come in behind Aquino. Cruz said the police told him they had seen reports of a protest planned for outside the church and had decided to attend on their own — they were not asked to do so by the church itself. Both the reverend and cops had warned advocates not to protest inside the church, Cruz said.

“She was asked to leave because I’m in the front looking that way, there were like 2o other activists there … it’s illegal in the state of New York at funerals or at houses of worship, inside,” Cruz said. “We have some parishioners who were elderly who were already nervous when they saw people chanting outside. I couldn’t afford to have chaos in the building, and have people injured, and we all know houses of worship have been sites of shootings.”

The reverend maintained that, though he didn’t believe Aquino would ever intentionally cause chaos, he worried about the crowd of people behind her — some of whom, he said, she might not know herself.

The church is generally quite progressive and regularly host left-leaning politicians and speakers, Cruz added, and supported Aquino in her 2020 run for state Assembly. He hasn’t yet spoken with her about the event, though the two do plan to meet to discuss it at some point. The event has been misrepresented online, he said.

“Most of the stuff on social media are outright lies,” Cruz said. “The community – and I’m not talking about just the church community — the community at large is not happy, because people don’t like people disrespecting houses of worship.”

Aquino, who is the executive director of community housing organization Tenants and Neighbors, also criticized Hochul’s housing plan, which she released last week alongside her State of the State address.

“We know MLK would have also stood up to [Hochul] on behalf of tenants, the homeless and working class, but on MLK day our Ex. Dir [Aqunio] was silenced for asking the governor to withdraw her Chief Judge nomination and pass real solutions to the housing crisis,” Tenants and Neighbors said in a statement. “[Hochul using] MLK’s speech to promote her nomination of a conservative anti-worker, and anti-tenant judge does not come too long before releasing a housing plan that overwhelmingly benefits wealthy real estate donors and fails to provide immediate relief.”

“I’m disappointed to see an event honoring MLK’s legacy turn into an event that stymied dissent of local activists. This nomination has raised many concerns and residents deserve to be heard on them,” Gounardes said on Twitter.

The senator previously said he is “deeply concerned” about LaSalle’s prior rulings, “including cases where he has ruled in favor of crisis pregnancy centers and made it harder for workers in my district to exercise their legal rights to organize through their union.”

“These decisions, among others, do not reflect the values that I think are most fitting for a Chief Judge … As a member of the Senate Judiciary committee, I will be exercising my responsibility of further reviewing Justice LaSalle’s record and evaluating how his nomination reflects on the Court of Appeals that our state needs,” Gounardes said in a Dec. 22 statement.

If the 19-member Judiciary Committee — which is comprised of 13 Democrats and six Republicans — votes against LaSalle on Wednesday, it will be the first time the state Senate has ever rejected a governor’s nominee to head the Court of Appeals. Hochul has argued that the committee vote is not enough and that the entire Senate must vote on the nomination. Democrats also hold the majority in the full senate, 42-21, but not all Democrats have voiced their opinions on LaSalle — be they positive or negative.

Brooklyn reps Julia Salazar and Kristen Gonzalez have voiced their opposition to the nomination, but neither sits on the Judiciary Committee, and they will not be part of the Jan. 18 hearing.