By Will Bredderman
comments
Posted on May 23, 2014 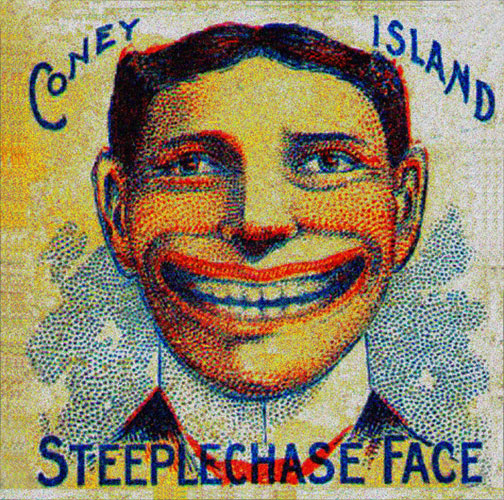 Funny face: The iconic visage of the People’s Playground was grinned at visitors from the gates of Steeplechase Park beginning in 1908.
Charles Denson

It’s the face of the People’s Playground.

Denson said the slyly beaming mug, which debuted with the sprawling amusement park in 1897, was symbolic of Steeplechase in more ways than one. Park founder George C. Tilyou’s creation reflected both his era’s dominant aesthetics and its repressed sexuality. Steeplechase featured neo-Classical architecture and manicured gardens — but also hidden fans beneath the Boardwalk entrance that blew girls’ skirts up over their waists, as well as a clown-faced dwarf that chased visitors around and spanked them with an electric paddle.

“Steeplechase was at once innocent and very kinky. There were things that couldn’t exist today in a P.C. world,” said Denson, adding that it was no accident that the original design of the Funny Face logo winked and leered. “The face is like a Victorian relic. It’s the repressed id, and the id being released.”

The photo exhibit “The Face of Steeplechase Park: Gams, Garters, and Stockings!” shows all those racy aspects of the Funny Face’s funzone.

“It’s the symbol of Coney Island, and what the exhibit’s showing is that it’s based on Tilyou’s vision,” said Denson.

An enormous glass wall bearing the Funny Face rose over the gates of Steeplechase in 1908, and smirked down at thrill-seekers for 56 years, until shortly after the park closed in 1964.

The following year, Fred Trump — father of The Donald — bought the property from the Tilyou family, and hoped to convert it to waterfront housing. To preempt the city from declaring the park a protected landmark, Trump held a party with his wealthy friends, where they threw bricks through the towering, glass Funny Face’s bared teeth.

“It’s so symbolic that that’s what he attacked,” Denson said. “That’s how powerful it was. He thought if he destroyed that, he would get his way with the city.”

Trump bulldozed the gates along with the rest of the park in 1966. But the Funny Face has lived on — on merchandise sold in People’s Playground shops, in the logo of local arts group Coney Island U.S.A., on bottles of Coney Island Lager, and now even on rides at the new Luna Park that opened in 2011.

“I think people identify with it. It represents the subconscious. People can project their feelings onto it, whatever turns them on,” Denson said. “The smile is as mysterious as the Mona Lisa’s. Hers was very subtle, and his is very obvious, but you can still read almost anything into it.”

The exhibit will be open all summer, from Memorial Day weekend through Labor Day. Look for it by Deno’s Wonder Wheel.