Queen of Soul gets ‘respect’ on Coney Island 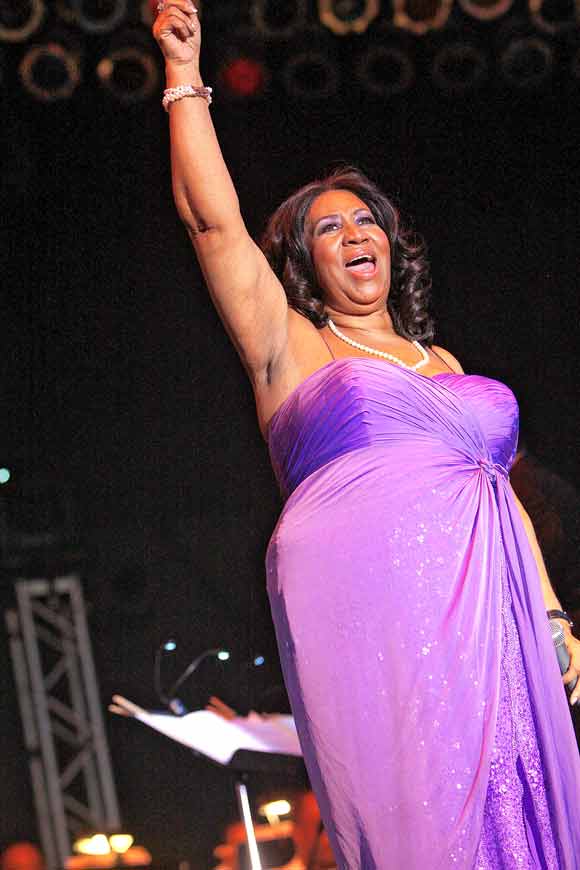 She socked it to us!

Aretha Franklin, the certified Queen of Soul, wowed thousands during a stunning standing-room-only concert in Coney Island on Aug. 4 — giving Brooklyn the R-E-S-P-E-C-T it deserves.

After having canceled twice on Brooklynites last year, the 69-year-old diva gave more than 10,000 fans a vibrant sampling of musical styles, from her classic hits like, “A Natural Woman,” “Chain of Fools,” and “Think,” to a super-charged tone-setting rendition of Jackie Wilson’s “Higher and Higher” and a soulful, gospel take on Simon and Garfunkel’s “Bridge over Troubled Waters.”

Looking resplendent in a purple gown that clearly solidified her position in music royalty, Franklin showed no signs of slowing down as she sauntered across the Seaside Summer Concert Series stage at the corner of Surf Avenue and W. 21st Street during the 90-minute concert — even though it was reported that she was performing on a broken toe.

Thursday’s concert was Franklin’s first performance in Brooklyn. She had canceled two shows last summer at Wingate Field in Crown Heights and at Asser Levy Seaside Park, where the Seaside Summer Concert Series was previously held, blaming a set of fractured ribs and abdominal pain she suffered following a fall.

But she made it a point to come to Brooklyn this year — and Borough President Markowitz was overjoyed that Franklin kept her promise to “have a foot-long hot dog at Coney Island.”

“The Queen of Soul put on a regal performance in the County of Kings,” Markowitz said. “You think it gets any better than that, fuhgeddaboudit!”

Markowitz’s Seaside Summer Concert Series continues next week with a Latino Music Festival on Aug. 11. The series then wraps up on Aug. 18 with a performance by Cheap Trick.