Too many buses! Community board says 4th Ave. depot unsafe

By Will Bredderman
0
comments
Posted on November 14, 2013 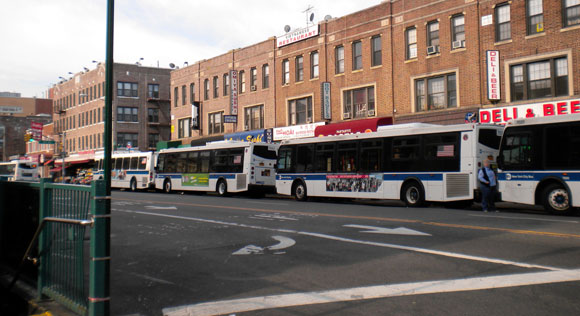 Talk about a bus-y intersection.

Bay Ridge’s Community Board 10 is demanding changes to the tangle of five bus routes that use the corner of 86th Street and Fourth Avenue as a depot, arguing that it makes the intersection extremely dangerous.

The B1, B16, S53, S93, and S79 buses pick up and drop off 16,000 people a day at the mega-stop, according to the Metropolitan Transit Authority — resulting in a bus bash the board says is causing horrific congestion on the street and sidewalk on the Verrazano-Narrows Bridge side of the intersection.

“The space just can’t accommodate what we have there,” said district manager Josephine Beckmann at the panel’s Traffic and Transportation Committee meeting on Nov. 12.

Members of the board argued that the congestion — with several simultaneous buses and dozens of people choking the intersection — is part of what makes the crossing — site of frequent pedestrian collisions and vehicular crashes — so unsafe.

“It’s very dangerous right now, and something needs to be done to change it,” said board member Liz Amato.

The members of the committee agreed that part of the problem is that the B1 and S79 buses park on the Fourth Avenue corner after completing their routes for as long as half an hour at a time — and recommended having the buses wait at 95th Street and Fourth Avenue instead, before returning to 86th and Fourth to start their journey again. Others raised the possibility of having one of the Staten Island buses stop along 86th Street instead of along Fourth Avenue.

The full board voted last month in favor of a city proposal to designate the Belt Parkway-bound right-hand lane as bus-only, and to extend the bus stop on that side down to the block between 87th and 88th streets.

But MTA officials said they were concerned about disturbing residents by changing the routes, and said they would have to conduct studies before pursuing any reforms.