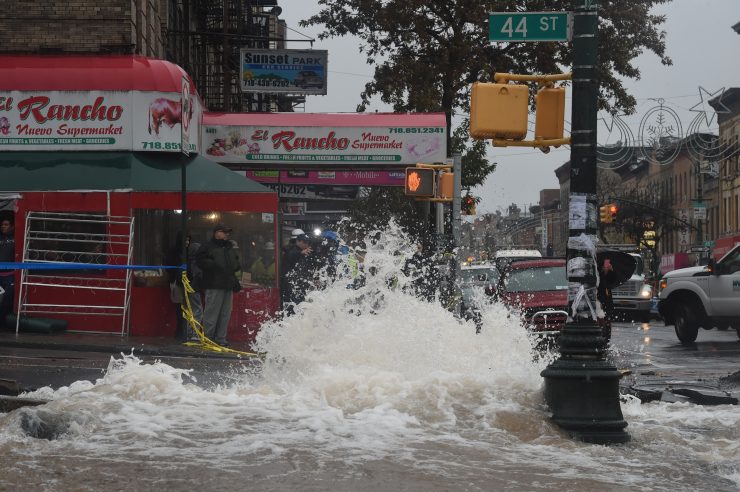 Water flooded the streets for hours in Sunset Park on Sunday, when a water main break caused a 30-foot wide crater to open, creating rivers running throughout adjoining roadways.

The water main erupted shortly after 5:30 am on Nov. 24 at the northwest corner of Fifth Avenue and 44th Street in Sunset Park, shooting rocks, sidewalk concrete and asphalt into the air and sending trash cans rolling down the street. At times, the water was shooting up to five feet high.

Luis Ramos, a 16-year-old who lives near the site, said the street shook before the water suddenly spouted into the air, waking him and his family up.

“I couldn’t believe what I saw when I came out this morning and the water was shooting into the air,” Ramos said. “I just was hoping nobody’s home was getting flooded.”

Some vehicles were in two feet of water, forcing NYPD tow trucks to come and remove them.

The flooding forced police to close parts of Third, Fourth, and Fifth Avenues from 43rd and 46th Streets, leading to traffic congestion throughout the community. Police officials were concerned that a corner section of Sunset Park Playground might be undermined and collapse, so they kept people away as well.

DEP officials were on the scene trying to shut down the water at multiple valves, but one official said they had to close the valves slowly to avoid additional main breaks resulting from a sudden change in pressure. Some of the valves were located up to 10 blocks away.

“DEP crews are working at the scene to shut off the water so repairs can be made,” a spokesman for the agency said.

Also at the scene were National Grid and Con Edison crews; both utilities were concerned that their lines may be impacted by the water that flooded the streets throughout the morning.

The damage to the street was extensive, and police officials cautioned drivers to stay away from the area into well Monday’s morning rush hour.