Waterweird! Aquatic art colony — with greenhouse — to set sail in May 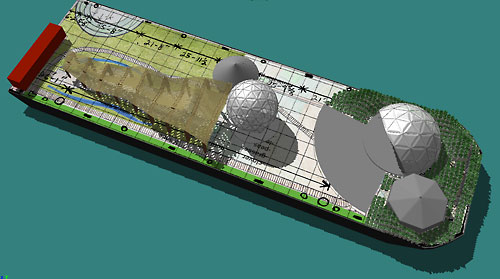 A group of artists wants to create an environmentally friendly floating “mini-biosphere” atop an old barge. Can they pull it off? Depends on your definition of “it.” If the project succeeds, the barge will set off from Brooklyn, organizers promise.

Call it the “Freegan Flotilla.”

In the wackiest work of aquatic art since Olafur Eliasson’s controversial “Waterfalls,” a team of local artists is planning to live aboard an eco-friendly barge all summer.

The aquatic artists’ colony — which they’re calling the “Waterpod” — will include a geodesic greenhouse made from recycled materials that will provide sustenance for the crew as it gets pulled around the city.

“[This] forces me to live like we will probably all need to live sooner or later,” said artist Mary Mattingly, who has worked for three years to construct the aquatic shelter, and plans to confine herself to her floating oasis from May until October.

On board, there’ll be lectures, screenings and art events.

Better bring your own snacks.

The artists taking part in the green project — think Kevin Costner’s “Waterworld” crossed with the Pauly Shore classic “Bio-Dome” — claim they will survive on only what they can grow on their 240-foot long vessel, what they can catch on the city’s waterways, and the water they can collect from rain and rivers.

Don’t worry, they’ll purify the water before consuming it.

And electricity will be generated by tapping into the sun and wind.

When they aren’t farming, fishing, or tending to their proposed chicken coop, the artists aim to educate New Yorkers about global warming, the risks of rising sea levels, and the concept of self-sufficient, nomadic sea cities.

“It’s about getting people to talk about how we can sustain ourselves in the future,” said Mattingly, who plans to host other artists, scientists and scholars and visitors on the rig, which will move between New York City docks every two weeks.

Organizers have not yet determined the route for the far-fetched sea project, but they insist that their $800,000 project isn’t a wet dream.

A May 15 launch from either Newtown Creek or one of the piers at the yet-to-be completed Brooklyn Bridge Park development is on the schedule.

A cross-section shows how people will be able to interact with the Waterpod.