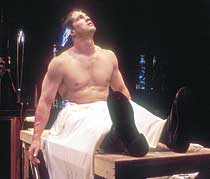 It's alive, it's alive: Actor Sean Guerin, the creature, gets charged up to wreak havoc on the house of Frankenstein. "Frankenstein," playing at the Heights Players Sept. 7-23, kicks off the theatrical troupe's 46th season.
Gary VanderPutten

The lineup was determined through input from audiences and members,
tempered with the availability and suitability of directors,
says member-at-large John Bourne. And the resulting selections
promise to keep audiences laughing, crying, guessing and tapping
their toes.

"What appealed to me," says director Bill Wood, "is
that this version sticks to the novel. The movie uses Hollywood
license." Unlike the 1931 movie starring Boris Karloff,
which takes a sensational approach to Shelley’s work, Gialanella’s
play "deals with an age-old question, the war between our
sense of morality and unrestrained scientific inquiry,"
says Wood.

Wood was also attracted by all the special effects called for
in the play – strobe lighting, a Jacob’s ladder (a bluish electrical
wave that runs up a tube between two conductors) and lots of
thunder and lightening – as well as the musical underscore by
Richard Peaslee.

"The play appeals to kids and adults," says Wood. "It’s
about fright, morality and sensitivity."

As the country debates the benefits and pitfalls of stem cell
research, "Frankenstein" couldn’t come at a more fortuitous
moment. "Frankenstein" runs Sept. 7-23.

"Gypsy," with book by Arthur Laurents, music by Jule
Styne and lyrics by Stephen Sondheim, became a classic almost
the moment Ethel Merman stepped onstage at the Broadway Theatre
in 1959 and belted out "See the Lights."

The sad, funny, sentimental and inspiring story of Gypsy Rose
Lee’s rise to fame as America’s most celebrated stripper, helped
and hindered by Mama Rose, the classic stage mother, has given
us one of our best-loved scores and forever changed the meaning
of the phrase, "Let me entertain you." It will be interesting
to see if the Heights Players’ production, directed by Ed Healy
Oct. 5-21, will be able to top the cast of Narrows Community
Theater’s June production.

Gripping drama takes over the stage Nov. 2-18 with Warren Leight’s
Tony award-winning play, "Side Man," about a young
man coming to terms with his father, one of the last sidemen
of the great jazz era of the ’50s. "Side Man" is directed
by Ted Thompson.

Right on time for the holiday season, the Heights Players mounts
"The Wizard of Oz." Based on the 1939 MGM musical starring
Judy Garland as Dorothy, this stage version once again follows
Dorothy, the Cowardly Lion, the Tin Man and the Scarecrow down
the yellow brick road as they search for the Wizard and all those
wonderful things "Somewhere Over the Rainbow." Directed
by Ellen Weinstein Pittari, "The Wizard of Oz" runs
Nov. 30-Dec. 16.

The Heights Players start off 2002 by taking a new look at Neil
Simon with "Jake’s Women." Simon’s hilarious look at
a middle-aged author whose fantasies about the women in his life
clash with their reality is directed by Steven Velardi. "Jake’s
Women" runs Jan. 4-20.

"Our audiences like Neil Simon. But like ’Side Man,’ ’Jake’s
Women’ is definitely for an adult audience. Neil Simon is not
for children," says Bourne.

However, for this season’s presentation of Shakespeare, the Heights
Players chose "A Midsummer Night’s Dream," one of the
Bard’s most child-friendly comedies. A romantic romp that enlists
the aid of fairies and mischievous imps, "A Midsummer Night’s
Dream" brings two sets of lovers together. Directed by Robert
J. Weinstein, the "Dream" will recur Feb. 1-17.

"’Toward Zero’ is one of Agatha Christie’s best," says
Bourne, who will be directing this play, which runs March 1-17.
Although the play, adapted by Christie and Gerald Werner, is
not among her best known, it has all the twists and turns, suspense
and surprises that have contributed to Christie’s renown.

"A Shot in the Dark" was first produced in 1960 as
the French play, "L’idiote," by Marcel Achard. A year
later, Harry Kurnitz presented his adaptation, "A Shot in
the Dark," on Broadway.

In 1964, the play was adapted for the film version starring Peter
Sellers as Inspector Clouseau. The plot revolves around the investigation
of a murder that appears to have been committed by a parlor maid
who was found unconscious, gun in hand, and nude beside her dead
lover. Although in the film version the lead character is the
inspector, in the stage version the main character is a nutty
judge. On March 29, "Shot," directed by James McNulty,
will begin its run on Willow Place.

The season ends, May 3-19, on a light note with Lerner and Loewe’s
1947 Broadway hit, "Brigadoon." The musical is about
a man who falls in love with a woman who lives in a Scottish
town that comes to life once every 100 years. Its legendary score
includes "Almost Like Being in Love."

And so the Heights Players come full circle, from horror to enchantment,
in a theatrical journey over the rainbow, into a land of fairies,
and to mythical Scottish towns, stopping now and then to plumb
the depths of the human psyche.

The Heights Players’ season begins with
"Frankenstein," Sept. 7-23. Tickets are $10, $8 seniors
and students. The Heights Players Theater is located at 26 Willow
Place. For more information on the upcoming season, call (718)
237-2752.