Brooklyn faithful get sprinkle of Lenten symbol on Ash Wednesday 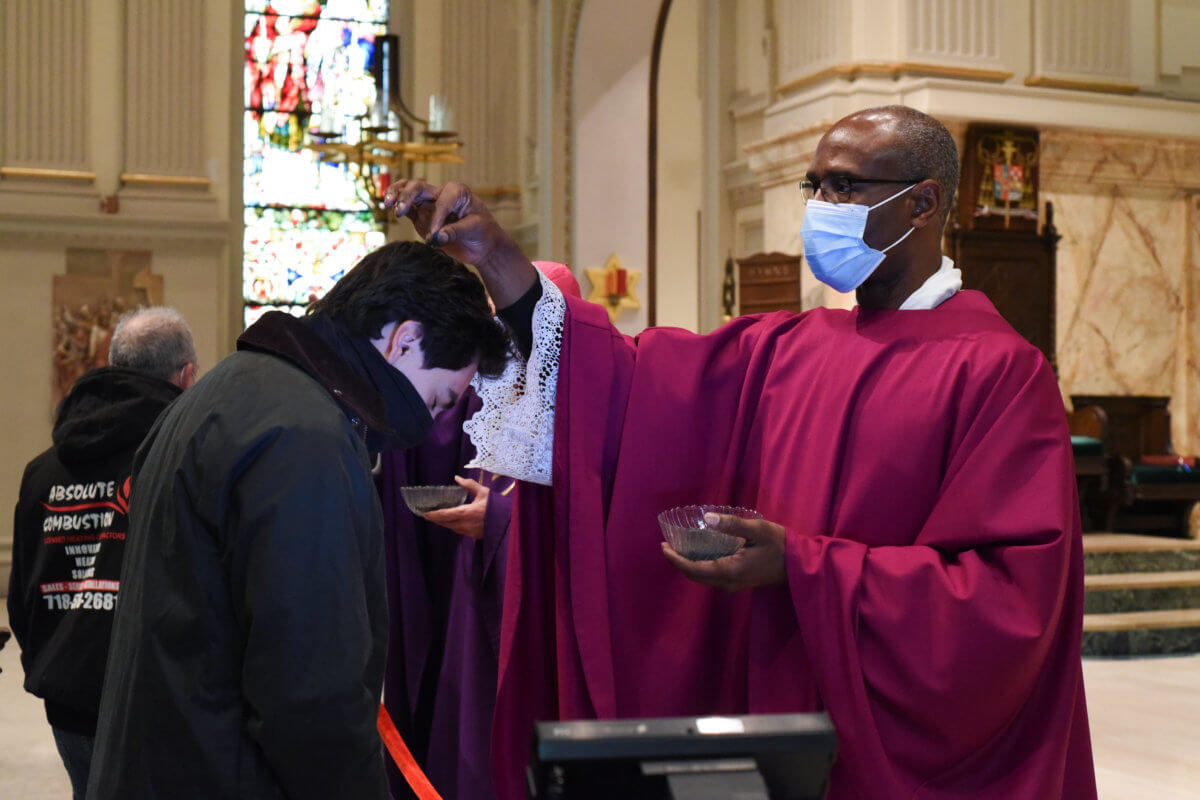 Feb. 17 is Ash Wednesday in the Christian church, the start of the 40-day season of Lent — a time of reflection and sacrifice on the way to Easter Sunday.

In other years, the day is literally marked on faithful foreheads with ashen signs of the cross inscribed by priests and ministers. But this year, as the COVID-19 pandemic rages, congregations had to figure out a safer and more socially distant way to continue the tradition — if at all.

At St. James Cathedral Basilica in Brooklyn, Bishop Nicholas DiMarzio, leader of the Diocese of Brooklyn, showed how the Roman Catholic Church would administer ashes in the time of COVID-19 by turning to an ancient custom that originated in Europe centuries ago.

Rather than placing a thumbful of ashes directly onto one’s forehead, DiMarzio took a pinch of the sanctified powder — the remains of blessed palms from last year’s Palm Sunday — and gently sprinkled it above a recipient’s bowed head, in a manner comparable to one seasoning food with a little salt.

For longtime parishioner Mary Pradt, 76, Wednesday’s service was a symbol of faith and perseverance.

“I saw a lot of parishioners here today that I haven’t seen since March,” the 20-year congregation member told Brooklyn Paper, adding that attendees — many of whom have underlying medical conditions — showed up for the socially distant Ash Wednesday service despite the ongoing threat of the novel coronavirus. “It’s nice to see those people.”

“Ash Wednesday marks the beginning of the holiest season on the Christan Church’s calendar and it meant a lot to the faithful in parishes throughout Brooklyn and Queens to be united as a faith community to begin this journey,” said Brooklyn Diocese spokesperson John Quaglione.

“The change in the way ashes were distributed this year, due to COVID-19, does not interfere with the true meaning,” he added. “During this period of Lent, we reflect on our lives and our relationship with God, who made us and whose son, Jesus Christ, died for our sins. During these fragile times, our faith continues to sustain us as we are mindful of the many in great need of hope, love, and acts of charity.”

Other congregations, however, forewent the forehead ritual altogether. The Cathedral of St. John the Divine in Washington Heights celebrated Ash Wednesday with a social distant, ash-less service on Feb. 17 on the steps of the house of worship.

The historic E. 112th Street house of worship on Amsterdam Avenue has not held a religious service inside its aged walls since March of last year. Putting the health of their congregation at the forefront of their minds, the only ceremonies offered during pandemic time have been either streamed over the internet or produced on the steps in front of the cathedral.

Although the COVID-19 vaccine rollout is in full swing, indoor dining has resumed at 25 percent and theme parks are now set to reopen in April, the Cathedral of St. John the Divine still has no plans of resuming indoor service.

“Because of the COVID pandemic, the Cathedral will join the other Episcopalians in the Diocese of New York in refraining from the physical imposition of ashes, but will celebrate the rest of the liturgy from the Book of Common Prayer,” the cathedral said in a statement.

In place of a traditional Ash Wednesday commemoration, the church traded in pews for steep steps as Father Patrick Malloy, the Sub-Dean of St. John the Divine, prepared an outside observance.

“We call this day Ash Wednesday, and the reason we call it Ash Wednesday is that on this day traditionally Christians of certain kinds of traditions, like the Episcopal church, receive the imposition of ashes on their foreheads. As a reminder of their mortality and as a mark of beginning this season of turning back to God, remembering again God’s unconditional love for them,” Father Malloy said. “Well, this year there are no ashes. This is Ash Wednesday without the ashes.”

Steven Livesay, with a Bible in hand, was ready to attend the outdoor service.

“It’s been a very dramatic process for me. I made a point of coming here today because I was here in December for the Christmas caroling, and that was followed by a shooting, and after that I decided that more than ever it is important for us to physically be here and show that we move forward,” Livesay said.

“It means a lot to me as a person of faith, as a New Yorker, as a person who is involved in this community,” Livesay added.