By Anna Bradley-Smith Posted on November 3, 2022 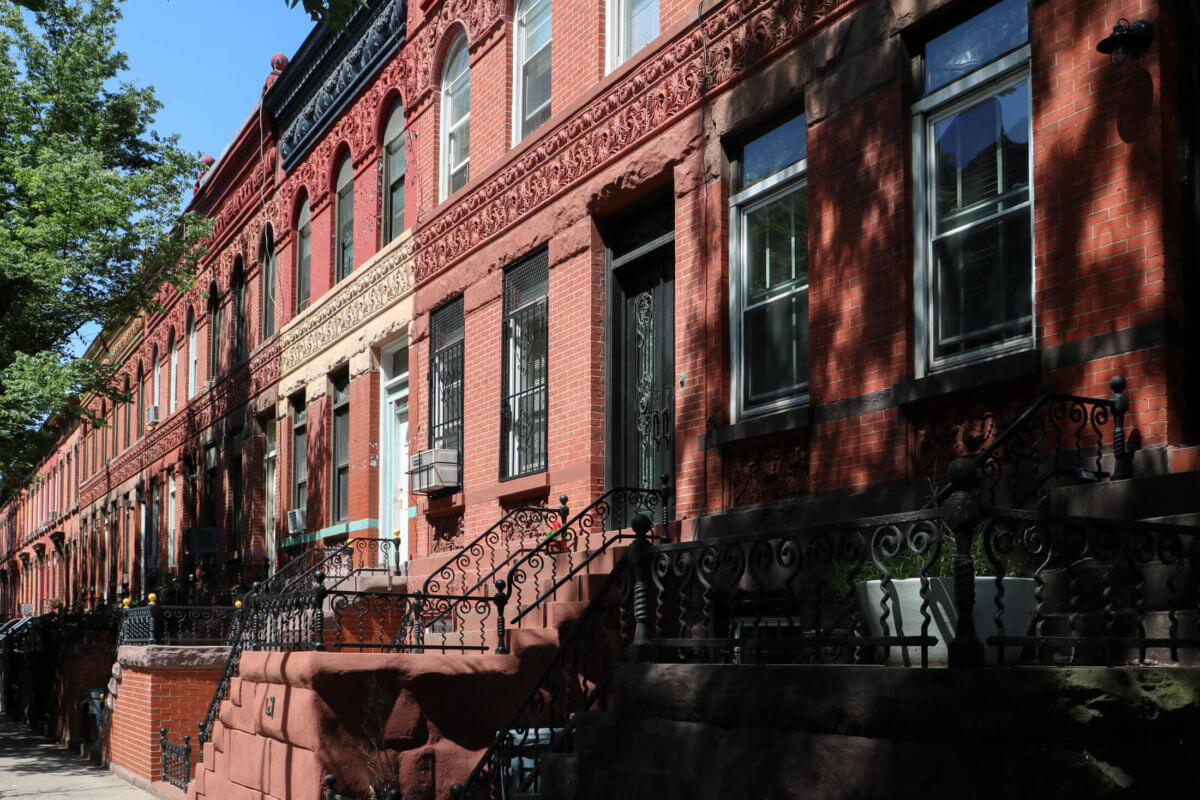 The proposed district would cover areas on both sides of Linden Street, including ten Queen Anne-style row houses that start on the corner of Bushwick Avenue and Linden Street.
Photo by Susan De Vries

Bushwick could be in for its first historic district following a unanimous vote by the Landmarks Preservation Commission to calendar a row of 32 brick and brownstone houses lining Linden Street, between Broadway and Bushwick Avenue.

At a Tuesday meeting, commissioners heard from LPC researcher Marianne Hurley how the “remarkably intact group” of row houses, built between 1885 and 1901 by several Brooklyn architects, represented a “highly successful integration of late 19th century styles” including the Queen Anne, Neo-Grec and Renaissance-Revival styles.

The district would cover areas on both sides of Linden Street, including ten Queen Anne-style brick and decorative terracotta row houses that start on the corner of Bushwick Avenue and Linden Street and which were commissioned in 1888 by prominent lawyer and one of the founders of Williamsburg Bank, Samuel M. Meeker, Hurley said. Meeker, and later his family, developed much of the section of Linden Street that is being considered.

Next to the Queen Annes sit eight midblock brick and brownstone row houses designed in the Neo-Grec style by architect Edward F. Gaylor and built in 1885. Hurley said the houses all have all typical Neo-Grec details such as incised shoulder lintels, bracketed sills, door hoods and cornices. Further down the block, still on the west side, sit three brownstone row houses with Renaissance-Revival details built by Benjamin Finksieper in 1901.

The final row of houses that make up the proposed district is on the other side of Linden Street and is composed of eleven Renaissance Revival-style row houses built by owner, architect and builder Charles E. Palmer between 1894 and 1896, Hurley said. According to the LPC report, the houses “have striking rusticated brownstone façades with alternating angled bays and generously sized front yards.”

Commissioner Fred Bland said the architecture on the block was astounding, and he said the use of terra cotta in the Queen Anne-style houses was some of the earliest seen in Brooklyn.

“It’s jaw dropping. One wonders how many more areas in our city lurk out there with this quality of architecture. It’s really astounding.”

Hurley told the commissioners the section of Linden street stood out in the neighborhood as “a complete and intact group from the late 19th century when Bushwick experienced its building boom.”

“Linden Street between Bushwick Avenue and Broadway stands out as one of the architecturally and historically significant residential areas in Bushwick. It represents an impressive streetscape and illustrates the first wave of widespread row house settlement during the 19th century,” Hurley said to the commissioners, before recommending they vote to consider it “based on this high quality of the architectural design and level of integrity that contribute to the proposed district’s sense of place.”

Commissioner Anne Holford Smith questioned whether the district should be extended to include more of Bushwick Avenue and some of the “notable buildings” along the stretch, however LPC director of research Kate Lemos McHale said the agency had looked a lot at Bushwick Avenue and thought the designation captured the most important area. “It’s an interesting place where there are historic buildings, but it is quite mixed, so this was really an incredible standout,” she said. “I think this was where we really wanted to start and to be able to recognize this historic district.”

Commissioner Michael Goldblum followed up asking whether the agency could expand the way it maps historic districts to protect the wider cohesiveness of blocks and areas, rather than just “significant intact, continuous expressions of a particular design or style or era.”

She added that determining boundaries was one of the hardest things LPC did. “We look at them carefully. We try to find the right mix. It’s not about consistency, or uniformity. Lots of our districts have multiple building types and multiple styles,” she said.

In regards to the proposed Linden Street Historic District, she said it was “really a standout block, both for its quality as well as for its typology.”

“This block does really stand out and it really doesn’t connect to anything on Bushwick Avenue, this Queen Anne building on the corner with the mansard roof is like really a termination gateway and/or gateway to this incredible block,” she said.

After the commissioners voted unanimously to calendar the district, Carroll said it would be brought back for a public hearing in the near future.