Omar and Clarence Hardy, who are fixing up the theater, claim they own the building.
Photo by Stefano Giovannini

The owner of Bedford-Stuyvesant’s Slave Theater plans to convert the civil rights landmark into a church by booting the “squatters” living and working inside.

Samuel Boykin is plotting a $3 million sale of the historic movie house on Fulton Street and Bedford Avenue — once a key gathering place for black activists — to a neighborhood congregation.

“We want it to remain a place for the community,” said the Ohio reverend, who declined to name the church purchasing the building until all of the papers have been signed. “But first we need to get the squatters out.”

The 55-year-old theater has languished since it closed more than two decades ago — and Boykin blames it on “illegal tenants” who won’t pay rent and refuse to move out.

But the current occupants — including first-floor residents who insist they own the building and a second-floor church that swears it pays rent — beg to differ.

“This is a lie from the pit of hell,” said Rev. Paul Lewis, whose Messengers for Christ World Healing Center would be booted to make room for the new house of worship. “We’ve been paying rent for years.”

Lewis insists he has a lease and his congregation will not leave.

The two men of the cloth will duke it out in court on Jan. 26.

The battle is the latest chapter in a long-running saga of the crumbling theater, which was purchased by Boykin’s uncle, the late Brooklyn Civil Court judge John Phillips, in the 1980s.

Phillips turned the Regal Theater into a jewel for the community called the Slave Theater, hosting black pride rallies led by the likes of Alton Maddox and Al Sharpton.

But it closed in 1998 after Phillips, a self-made millionaire, failed to pay taxes. A court declared the aging judge “mentally incompetent” in a controversial 2001 decision and court appointed-guardians took possession of his estate and let the Slave Theater fall into disrepair.

Boykin and other relatives seized it back and put it on the market in 2007, but it never sold.

Since then, squatters got into the first floor using an old key and damaged the theater’s interior, according to Boykin.

But some of those alleged squatters claim they are the Slave Theater’s rightful owners.

Clarence and Omar Hardy, a father and son who were friends with Phillips, claim they bought the building from the judge prior to his death in 2008 under a company called “J and J Real Estate.” They plan on opening an art space inside the Slave Theater and insist they’re not going anywhere, no matter Boykin’s threats.

“He’s trying to act like he knows this neighborhood — but we own this building and we don’t want to sell,” said Omar, who is fighting Boykin for the property in a separate court case.

Boykin is optimistic he will sell the building to the church and step away from the headache once and for all.

“The whole thing has been a real mess,” Boykin said. 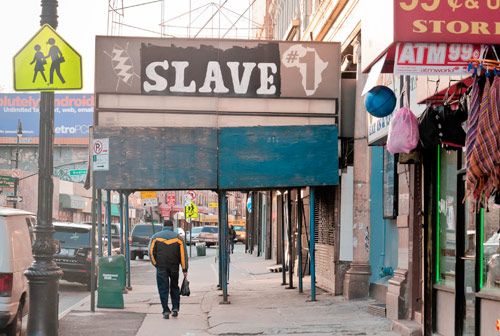 The owner of the long-shuttered Slave Theater plans to sell the historic film house to a church. But the people living and working inside say they’re not going anywhere.
By Stefano Giovannini