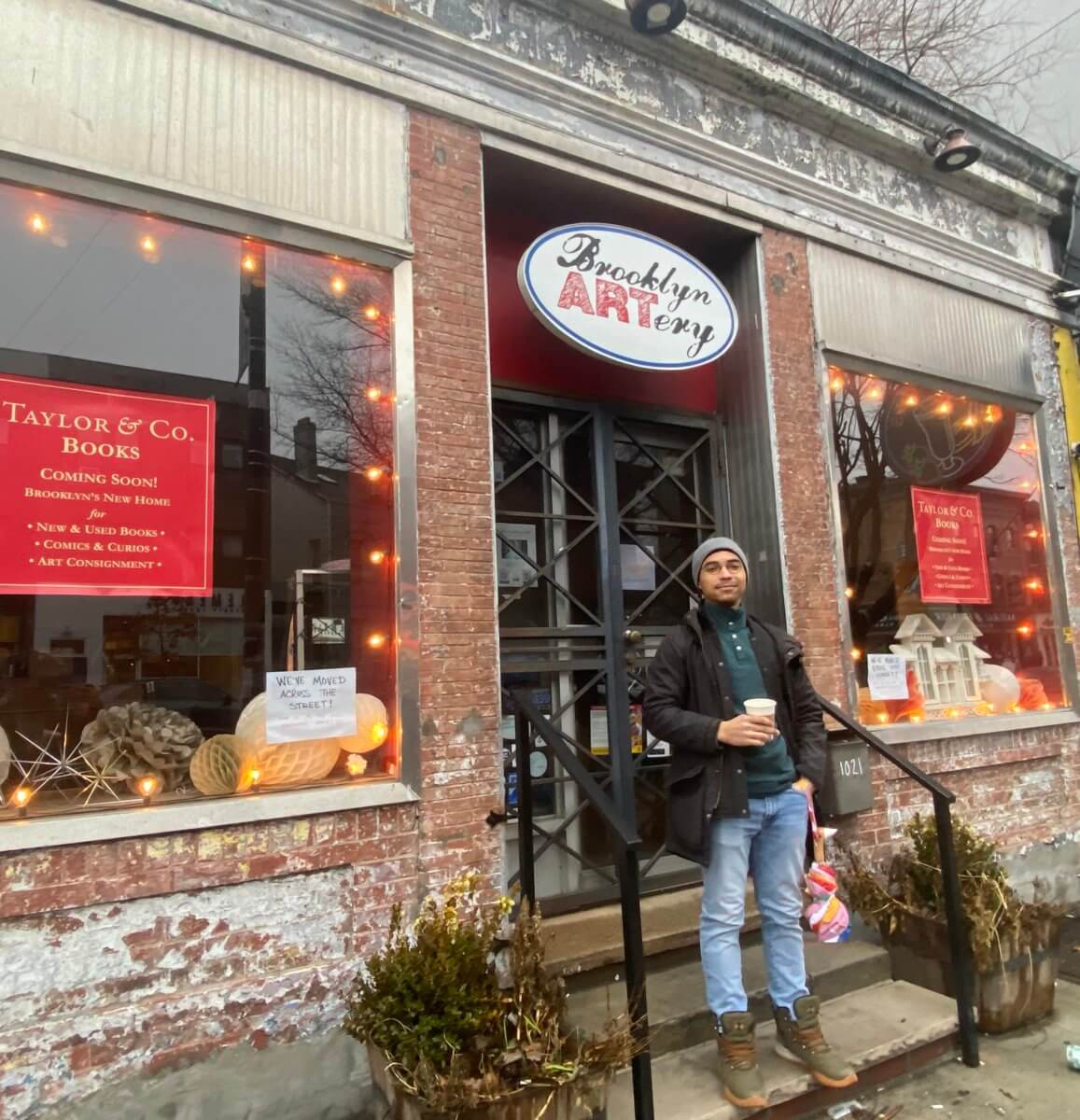 Ditmas Park native Andrew Colarusso, a renowned poet and bookworm, is set to open an independent bookstore on Cortelyou Road, the block’s first in over twenty years.

Colarusso’s shop, Taylor  & Co., has taken over the former location of the Brooklyn Artery at 1021 Cortelyou Road and is expected to open its doors to fellow bibliophiles by March 2023.

“It’s been a learning process. I’m learning very quickly what it will take to make this a solvent and sustainable business,” he said. “There are a lot of moving parts and I’m trying to be thoughtful in the choices that I make and laying the foundation for this thing.”

Colarusso who grew up attending church and visiting friends in the area is still in the beginning stages of opening the independent library , just a couple doors down from the early learning center he attended as a kid. As the former owners transition to their new location — across the street –he is using his artistic skill to pre-design the space and garnering community support through a fundraiser which has raised $6,498 in it’s first week.

“I’m confident we’ll be fine but I do want to be mindful of what the best strategies are for making sure that this bookstore is not only solvent and breaking even but growing in some demonstrative way,” he said. “Getting started has been exciting and that excitement I want to hold on to and maintain when things get little bit more technical and tedious.”

He say’s while books have always been a passion of his — the idea of opening his own shop for new and used publications stood as nothing more than a pipe dream.

“It’s a dream that I never would have been audacious enough to have for myself. If you told me that I would be opening a bookstore on Cortelyou, I’d said ‘you’re nuts’,” he told Brooklyn Paper.

Things fell together for the literary aficionado when he reached out to the former space owner’s right before they transitioned to a larger area across the street. In some ways, he attributes this happenstance to his faith.

“Sometimes in a sense I think God will have a plan for you that’s bigger than anything you would imagine on your own. This feels a bit like that where on my own this would seem too ambitious and too generous and hopeful and beautiful to think I could have a bookstore in the neighborhood I grew up in,” Colarusso told Brooklyn Paper.

Meredith Jacks, co-owner of Brooklyn Artery, says it was his intentionality that made hims stand out as a candidate for the space along with the area’s dire need for a communal book hub.

“The timing was perfect but it was beyond that because we had a lot of people who were interested in our space,” Jacks said. “He’s just an incredible warm and communicative and intentional person and we were just really struck with him.”

Cortelyou Road hasn’t had their own library since the beloved ‘Mostly Book’s’ shuttered it’s doors in 1999. Since then, locals have had to journey to larger shops like Greenlight to get their novel fix.

“It’s been a long time. The neighborhood is such an arts and music and literary spot but that the thing, the literary side is the thing that doesn’t even have a home,” Jacks said. “It’s exciting to see another home grown business in the neighborhood and people are really excited for him and what that would bring.”

Future plans for the space include book readings, story time for children, community events and collaborative projects with The Brooklyn Artery. As word of a new shop has spread, area residents have taken to Colarusso’s vision, donating invetory, money and time to help him get Taylor & Co. off the ground.

“I’m excited to be able to sell books but more exciting than that has been the community response to this endeavor,” he said. “A lot of people have shown support and enthusiasm and that feels good.”