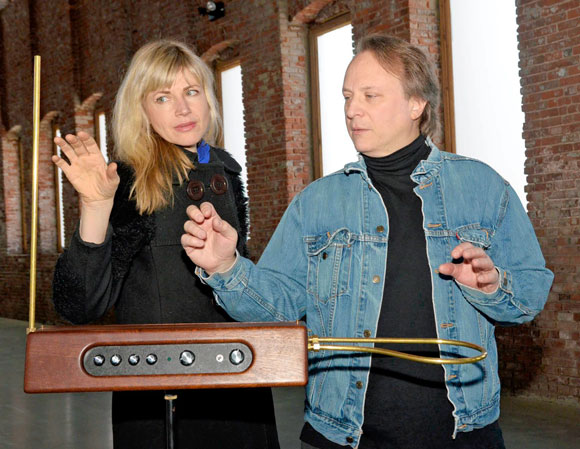 Making waves: Rob Schwimmer and Dorit Chrysler will each play solo theremin sets, and then will lead a 12-piece theremin orchestra in a concert on March 29 at Pioneer Works in Red Hook.
Photo by Elizabeth Graham

The popularity of the theremin comes in waves.

Now, as its appreciation is once again on the rise, a group of theremin enthusiasts from around the city have teamed up to extoll the virtues of the strange instrument to possible converts.

“There has been a resurgence in interest in analog synthesizers and vintage gear, and theremins have all the analog and vintage cache,” said thereminist Rob Schwimmer. “Also, theremins are the freakiest-looking thing anyone has ever seen.”

On March 29, the Theremin Society will host a show at Pioneer Works in Red Hook that will feature performances by Schwimmer and Dorit Chrysler, as well as a 12-piece theremin orchestra of students from an earlier workshop on the instrument, which Chrysler and Schwimmer will conduct. Live performances such as this are really the only way to fully appreciate the theremin, said Schwimmer.

For those who have never seen nor heard one, the theremin is a musical instrument made up of two radio frequency oscillators. A thereminist waves his or her hands around two antennae, using one hand to control the pitch of the sound and the other to control the volume. At no time does the player touch the instrument to play it.

“One of the cool things about the theremin being a young instrument is that people are still figuring out how it fits into music as we know it,” said Schwimmer. “Is it for classical or avant garde or a rock band. The answer to all is ‘yes.’”

Chrysler believes this will be the first performance of an all-theremin orchestra since the instrument’s inventor, Leon Theremin, assembled a group of players to take the stage at Carnegie Hall in 1928.

The Theremin Society went defunct for several years, until a few members starting hosting jams at Joe’s Pub in 2012. The group then came back to life and hosted a few concerts there every year, often showcasing thereminists from around the world when they came through New York City. Chrysler, Schwimmer, and a handful of other players also started hosting workshops for novice players.

“The beauty of the theremin is there is no proper or established way that it is supposed to sound, so anyone can try their hand at it,” said Chrysler. “We give them the basics of the technicality, just a little theremin kickstart.”