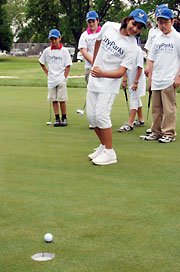 First golfer Mayor Bloomberg broke in the putting green at the city’s newest golf center at Dyker Beach Park last Friday, but Hizzoner will never get to play a round at the six-hole complex — it’s exclusively for kids.

The $8-million center, run by the City Parks Foundation, also includes a chipping range, golf simulators and a 5,000-square-foot clubhouse. Open seven days a week between July and October, the center is the first of its kind in the country.

“This facility will introduce so many children, who otherwise wouldn’t have had the chance to all the benefits of the game, including sportsmanship, self-discipline and enjoying the outdoors,” said the mayor.

Eleven-year-old golf buff Erika Cristiano of Bay Ridge agreed, though she put it a different way.

“I like that golf’s not like other games,” said Christiano, who caught the golf bug while participating in a less-intensive City Parks Foundation program that gives kids the basics.

But that’s nothing compared to the new center, said Gregg Gaulocher, director of the facility.

“You can teach someone to swing in the park, but they don’t know to play,” said Gaulocher. “But it’s like chess, you need to learn more than how to move each piece.”

The center is not just about learning the Inner Game, but also helping urban kids take advantage of the many golf scholarships (who knew there were golf scholarships?) to colleges around the country.

Perhaps that explains the location — Dyker Beach is where Earl Woods once played with his son before he became a superstar named Tiger.

They say that golf is a long walk spoiled. But in order to have this walk spoiled, you’ll have to drive. The new center is midway between the R train’s 86th Street station and the M train at 18th Avenue in Bensonhurst. Hopping the No. 8 bus from either station will get you there — eventually.

Hannah Youssef, a 12-year-old from Staten Island, is lucky. Her mom said she’ll drive her to Bay Ridge three times a week to take advantage of the free schooling.

The good news is that kids won’t be carrying their clubs all the way from the subway. Callaway, a golf equipment manufacturer, has provided fancy sticks that stay at the center.

One-quarter of the $8 million cost came from city taxpayers. The rest is a combination of both private and public grants, including Con Edison.

After his ceremonial putt (swing and a miss!), the orange-sweater-clad Bloomberg played a round at the big boy’s course next door with chef Mario Battali (without his trademark Crocs) and comic Jimmy Fallon (white cardigan) in a fundraiser to help solicit an additional $4 million.

“I can’t believe they built this place for kids,” said Filocamo, who learned the game at age 8.

“They’re not being taught by their uncle who is an accountant here. They’ll learn the game for real.”