Green-Wood not set in stone: Cemetery out of landmark running 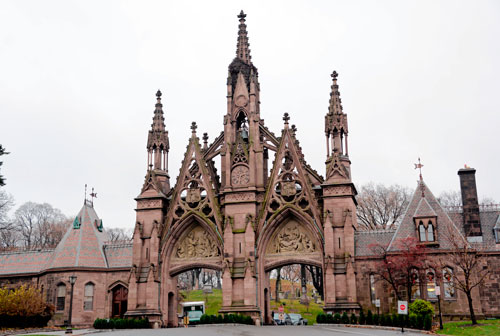 Green-Wood Cemetery may be the largest and grandest in Brooklyn, and among the oldest, but it doesn’t merit landmark status, according to city preservationists.

The Landmark Preservation Commission put the kibosh on a long-dormant bid to landmark the graveyard this week — and that was just fine with the folks who mind the place. Green-Wood management says such a designation would make it so special permission would be needed to so much as alter one gravestone.

“City landmark status would impose onerous, expensive, and impractical restrictions on our ability to function as an active cemetery,” said Richard Moylan, president of the cemetery. “We would not oppose the commission’s effort to remove the cemetery for consideration as a designated landmark.”

That is not to say that Green-Wood, which lists Boss Tweed and Jean-Michel Basquiat as permanent residents, is not recognized. It was among the first landscaped graveyards in the country, making it a precursor to the modern park, and it is already designated a national historic site. Plus parts of it, including the Gothic arch at the 25th Street and Fifth Avenue entrance, are already city landmarks.

But the move to recognize the whole city of the dead at the municipal level would have been a bureaucratic entanglement too far, forcing mourning families and maintenance crews to face onerous paperwork, according to Moylan and the commission.

“Green-Wood is still a very active cemetery and it would be impractical for us to have to file for permits and permissions every time, for instance, if we needed to open a grave or install a foundation for a memorial,” Moylan said.

“A big reason it has languished on the list is that burden,” commission spokeswoman Damaris Olivo said.

The removal occurred just in time for the cemetery to move its office across 25th Street and demolish the existing building to make way for more tombs in the space-starved complex, according to a DNAinfo report.

The de-listing came as part of a purge that removed 100 sites citywide on the commission’s docket, called a calendar, from consideration. City preservationists first considered the graveyard in 1981, and like other de-calendared sites, it had remained on the list despite the fact the commission had not taken action on it in years. Also erased from the running were such disparate Brooklyn structures as the Coney Island Pumping Station and the house of Lady Deborah Moody, who founded the town of Gravesend in 1643.

A southern Brooklyn pol decried the latter removal, saying merely having it on the list of possible landmarks protected it. “The Lady Deborah Moody House is an irreplaceable piece of Brooklyn history dating back before the American Revolution and it therefore deserves to be protected from random demolition,” Assemblyman Steven Cymbrowitz (D–Sheepshead Bay). “Removing the house from landmarks consideration, and doing so without any formal public input, shows a lack of respect for Brooklyn’s past and deprives residents of the right to weigh in regarding the house’s fate.”

“It was going for sale and people were going to knock it down,” said Victoria Hofmo. “We were able to save the house because it had been calendared. It gave us time.”

The commission put the house on its docket in 1980, and it spent 20 years there with no movement, city records show. The home’s owner planned to sell the lot to developers in 1997, so Hofmo and local preservationists formed the Friends of the Farrell House to mount a resistance, Hofmo said.

If the home had not been previously calendared, the push would have fallen flat, because the owner could have sold the lot before activists had time to submit the site for landmark consideration and get it on the list, Hofmo said.

The city landmarked the structure in 1999, and a family bought the home in 2000, according to property records.

Olivo argues that preservationists should not fear that the de-listing of a site will put in the crosshairs of development. The consideration of declaring a site a landmark does not afford it indefinite protection past the 40 days that the commission has to decide following an initial consideration, she said.

“It’s a misconception that these sites were protected,” she said. Marking the way: Making the entire cemetery a landmark would have added the requirement of special approval for altering even a single grave marker.
Photo by Elizabeth Graham