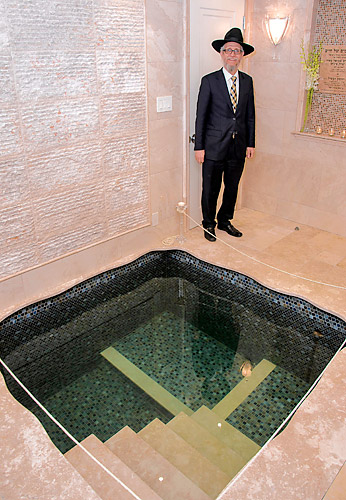 The first mikvah ever in Park Slope finally opened after more than five years of construction.

The three-story William and Betty Katz Center for Jewish Life, on 15th Street between Sixth and Seventh avenues, was celebrated with a grand ribbon-cutting ceremony on Monday, drawing dozens of observant Jews and shutting down the street to traffic for several hours. The project has been controversial with neighbors since its inception.

A mikvah, which literally translates as “pool,” is a Jewish ritual bathhouse and an integral part of the religion, said Rabbi Shimon Hecht, leader of Congregation B’nai Jacob on Ninth Street. He also heads the Chabad of Brownstone Brooklyn, which built the mikvah.

“It’s a dream come true,” he said, adding that building a mikvah even takes precedence over building a house of worship.

The pristine, spa-like, facility is designed for observant Jews to partake in a ritual process of purification and cleansing, in a solitary and ultra private manner, by immersing themselves in specially constructed pools. The new mikvah has baths for men on the first floor and separate baths for women on the lower level. It’s available only by appointment.

Jewish law, Hecht explained, requires that married women must bathe in a mikvah after their monthly mensuration cycles end in order to regain ritual purity. Until she takes a post-period mikvah, the woman is not permitted to have sex with, or even be with, her husband. According to custom, women typically use the facility in the evening, while men use the bathhouse during the day.

Before the mikvah was completed, the rabbi said Park Slope Jews traveled to other neighborhoods, such as Brooklyn Heights and Crown Heights, to perform the sacred rite at other bathhouses, or couldn’t go because of travel inconvenience.

“We’re hoping that by having our own mikvah, it will increase awareness and the desire for people who want to use the mikvah,” he said.

The bathing complex was built with two rentable apartments where observant Jews from out-of-town can stay if visiting sick relatives at nearby New York Methodist Hospital.

Neighbors still fear that having a bathhouse on a residential block will generate parking and traffic congestion once it becomes fully operational.

“I really hope it doesn’t make it impossible to park,” said Nancy Carpenter, who lives across the street from the facility and says area parking is difficult enough.

But Hecht said that there is no reason to be concerned about parking issues or congestion. He estimates that in a single day only 10 to 12 visitors will likely use the facility because only three people per hour are allowed to use the baths.