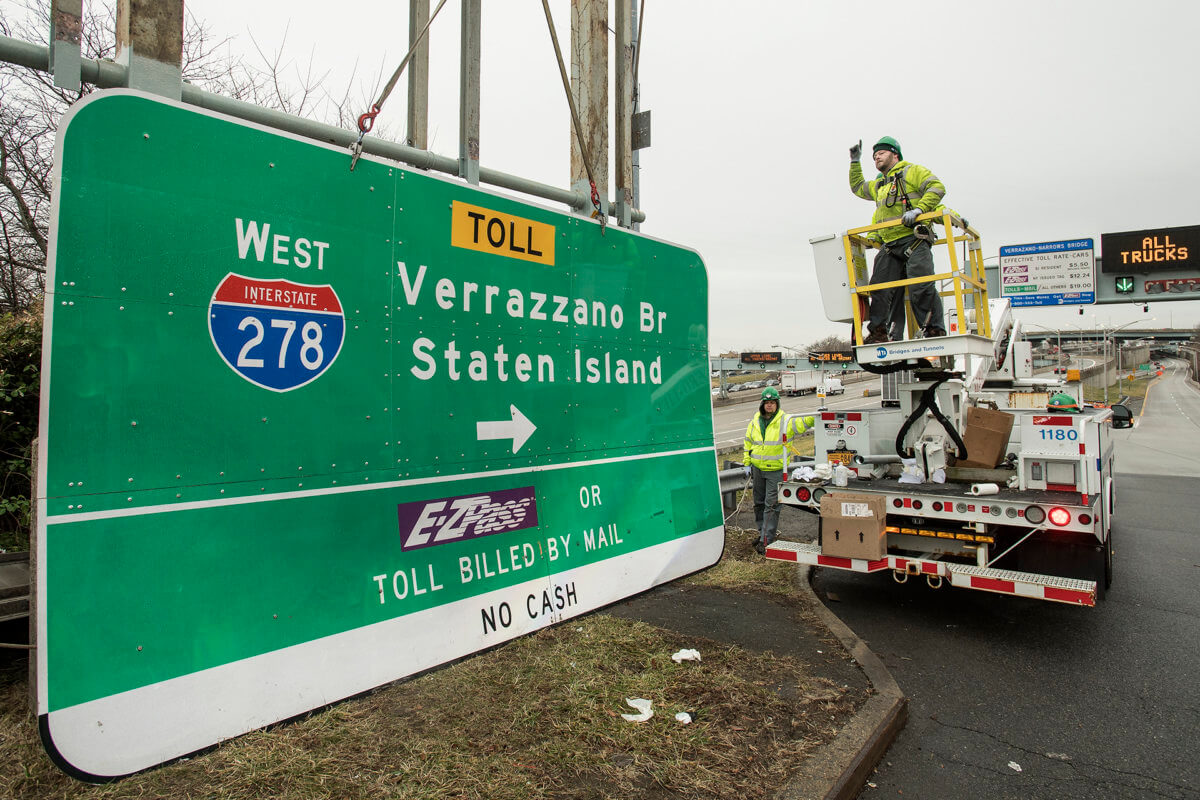 Transit authorities hung new signs on Wednesday that corrected the spelling of the Verrazzano-Narrows Bridge for the first time in 54 years, delighting elected officials who fought for the spelling correction.

“This is a victory for Italian-Americans and also the taxpayers because that extra Z won’t cost us a dime,” said local Councilman Justin Brannan (D-Bensonhurst).

Built in 1964, the Verrazano-Narrows was named for Giovanni da Verrazzano, the first European explorer who entered New York harbor in 1524, but the name was only spelled with one “z” because of an error in the bridge’s construction contract.

Italian-American residents began pushing to correct the spelling in 2016, when Dyker Heights activist Robert Nash circulated a petition calling on the name change that racked up more than 650 signatures.

The movement soon gained the support of local pols, who spearheaded a statewide push for the name change. In 2016, former State Senator Marty Golden (R-Bay Ridge) sponsored a bill to add the “z” to the official name, which passed unanimously in June of 2018. Governor Andrew Cuomo approved the bill in October of that year, claiming that the change was an important win for Italian-Americans.

“We are correcting this decades-old misspelling out of respect to the legacy of the explorer and to New York’s heritage,” Cuomo said in a statement.

The MTA long held off on changing the bridge’s name, arguing that it could cost millions to replace misspelled signs, maps, and brochures. However, the 2018 legislation mandating that the MTA would only install new signs when the old ones needed replacement, reducing the project’s costs, the Associated Press reported.

Crews for Metropolitan Transit Authority Bridges and Tunnels, which has jurisdiction over the bridge, installed the first 19 new signs with corrected spelling on Feb. 5, and workers will continue installing signs as needed, according to MTA spokesman Aaron Donovan.

The installation comes two months after federal legislation created two-way tolling on the Verrazzano Bridge, scrapping the decades-long, one-way tolling system that charged drivers entering Staten Island $19, and let in Brooklyn-bound motorists for free. Proponents argued that the two-way system would help reduce pollution, ease traffic, and steer trucks away from the southern Brooklyn without raising the round-trip toll.

Brannan lauded the split-tolling legislation and supported the bridge’s name change, which he claimed corrects a decades-long typo.

“Are there more important things we should be focused on when it comes to the Verrazzano Bridge?” he said. “Absolutely. The toll is too damn high. But it is important that we spell the man’s name right.”

Another local pol agreed, claiming that reducing tolls are his top priority.