J.J. Byrned! Washington gets his park — old beep gets stripped 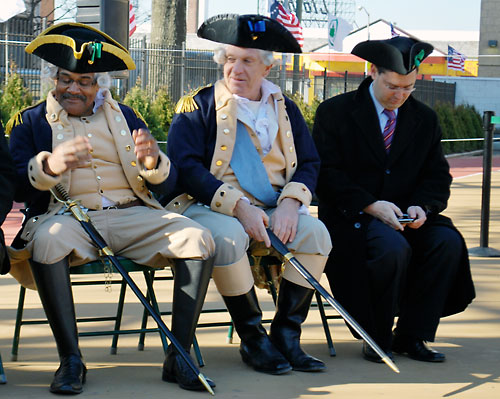 Some call it whitewashing history and some call it righting a wrong — but a dead borough president’s name was stripped off a Park Slope park on Wednesday so that the greenspace could be renamed for George Washington.

Dozens of elected officials and community leaders wore Revolutionary-era garb, including powdered wigs and knickers, and donned tri-corner hats to mark the occasion. Virtually everyone was thanked, except J.J. Byrne, whose name will remain on a small playground within the park.

The controversial renaming of the three-acre park — which is bordered by Fourth and Fifth avenues and Third and Fifth streets — is actually a re-renaming, supporters pointed out, since the greenspace was originally the home of a baseball field called Washington Park, where a precursor of the beloved Brooklyn Dodgers once played.

But in 1933, the park was officially named for Byrne, the borough president who died in office in 1930. Among his many achievements, he was credited with restoring the Revolutionary War–era Old Stone House that is the centerpiece of the park.

Byrne’s current-day successor, Borough President Markowitz, said he had mixed feelings about stripping his predecessor’s name off a park — given that one day, there may be a park in Brooklyn named for the two-term beep.

“[In the end], I’m sure that Byrne will note that naming the park for the father of our nation is most appropriate,” Markowitz said, laughing off a suggestion that he might feel differently if Markowitz Park is someday created and then renamed after a Founding Father. Skateboarder Justin Wilson (with a tri-corner hat atop his helmet) christened the new “Washington Park” skate area by smashing through a banner.
The Brooklyn Paper / Sarah Portlock

The Old Stone House commemorates the heroic efforts of 400 Maryland soldiers, who held off thousands of British and Hessian troops long enough for Washington and the rag-tag rebel army to flee across Gowanus Creek and then to safety in Manhattan in August 1776.

Washington was never in the area that became the park, and Washington already has a street in DUMBO, an avenue in Prospect Heights, a park in Clinton Hill and at least one bagel shop and one dental office in the borough where the general spent so little time.

Byrne now only has his jungle gym, swings and twisty slide.

The ceremony also served as a groundbreaking for the city’s two-phase, $3-million renovation at the northern end of the park. The city will build a new synthetic turf field and, next year, renovate the existing playground.

“It’s a great day, and a great thing for the community — and [the renovations] are better late than never,” said Community Board 6 parks committee chair Nica Lalli. Enjoy it while it lasts. J.J. Byrne signs will soon come down.
The Brooklyn Paper / Noelle D’Arrigo