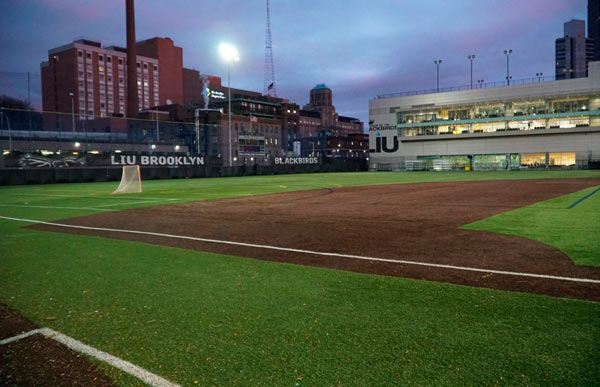 Long Island University will rake in $41 million — and get a new building with a parking garage and outdoor sports fields on top — just for letting a developer build a 34-story skyscraper on the site of the campus’s current athletic center.

RXR Realty is coughing up the cash so it can build the new tower, which will contain floors occupied by the college below apartments owned by the builder, on a parcel of university land along Willoughby Street and Ashland Place, according to a rep for the company.

“[The university building] is a podium … and our building starts above that,” said RXR Realty honcho Seth Pinsky. “I would think less about who owns the land and more about who owns the structures, and we will own the residential building.”

The hybrid edifice’s residential floors will contain 476 units, about 140 of which the builder hopes will be below-market-rate through the state’s 421a housing-subsidy program, according to Pinsky.

The developer-owned tower will also boast amenities including an exercise space, a kids’ room, and a yoga studio, according to permits filed with the Department of Buildings,
which are being processed.

RXR Realty will shell out a total of $300 million for the project, $76 million of which it paid the university for building rights on its campus.

School honchos will reinvest a little less than half that amount — $35 million — in the new development, and put the rest towards existing programs and scholarships, a rep for the college said.

The new university building is part of a sweeping makeover its honchos hope to implement on its Brooklyn campus over the next decade, the spokesman said.

That project also calls for a new food court, classrooms for a digital-game-design program, a center for media arts, expanded laboratories and computer-science curriculum, erecting two additional floors atop the school’s Health Sciences and Pharmacy buildings, and creating new space within its library, he said.

“A partnership like this essentially brings in the resources we need to move forward with what is really the most ambitious master plan we’ve ever had,” said Jon Schneider. “It’s really exciting for us.”

The university-owned portion of the new edifice is slated to open in 2021, with the developer-owned residential tower opening the following year.