Locals want cops to search every bag on the Boardwalk 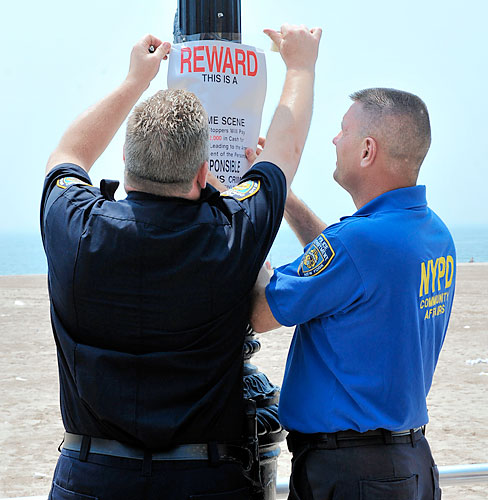 Brighton Beach residents are demanding that cops step up security on the Boardwalk — including the drastic step of searching all bags for weapons — to make sure that another shooting like the one that killed a 16-year-old two weeks again doesn’t happen again.

Residents demanded the increase security on the historic beachfront plank at a meeting with cops on Monday night at Tatiana’s, the Boardwalk restaurant where a diner was hit by one of the stray bullets in the June 9 gang gunfight.

At the meeting, dozens of locals called for a number of post-9–11–style security initiatives — including stationing cops outside a nearby subway station as a show of force and bringing in more mounted police — but several demanded the ultimate safety measure: searching beachgoers and strollers before granting them access the public Boardwalk.

“You should set up barriers and do random checks on bags,” said local Russ Miller.

The neighborhood’s top cop said he’d consider the possibility of implementing the measures, some of which are rarely seen at outdoor, public venues. Currently, for example, mounties only ride through the area on big holidays like July 4.

It’s unclear if random bag checks at a public park are legal, given a little thing called the Fourth Amendment to the Constitution, which protects “the right of the people to be secure in their persons, houses, papers, and effects, against unreasonable searches and seizures.”

“People have a right to not be accosted in free, public spaces,” said Chris Owens, a Democratic District Leader from Park Slope and a lawyer with Advocates for Justice, a civil rights law practice.

But residents are desparate for solutions, as they say summertime crowds have gotten too big for the current police force to handle. Capt. Peter DeBlasio of the 60th Precinct disagreed, saying that the community is already well-guarded, thanks to the NYPD’s annual deployment of additional officers to the beach every summer.

“The shooting was horrible, but it was an isolated incident,” DeBlasio said.

In fact, it was anything but.

The shooting of Tysha Jones was actually just one of three bloody events on the first hot day of summer, when kids off from school for Brooklyn–Queens Day flooded the beach and its surrounding communities.

First, at around 4 pm, a thug slashed a teen across the neck on the Boardwalk near W. 16th Street. Cops believe that the incident led to the retaliatory shooting that claimed the life of Jones and injured four.

The day’s violence continued during the ensuing exodus to the subway: another man was stabbed on the Q train, police said.

Of course, some ideas were better than others.

“Let’s train an auxiliary of strong Russian men who know how to box and can patrol along with police,” said Isabella, who declined to give her last name. It is unclear if DeBlasio is seriously considering hiring a force of Ivan Drago-like strongmen, but he said that he’d explore implementing certain suggestions, such as baggage checkpoints.

“We’ll look into any idea from anyone and do our best to explore how we can implement it,” DeBlasio said. “And we welcome people to start neighborhood watch groups.”