Makeover of Greenpoint’s Polonaise Terrace gets green light from Landmarks 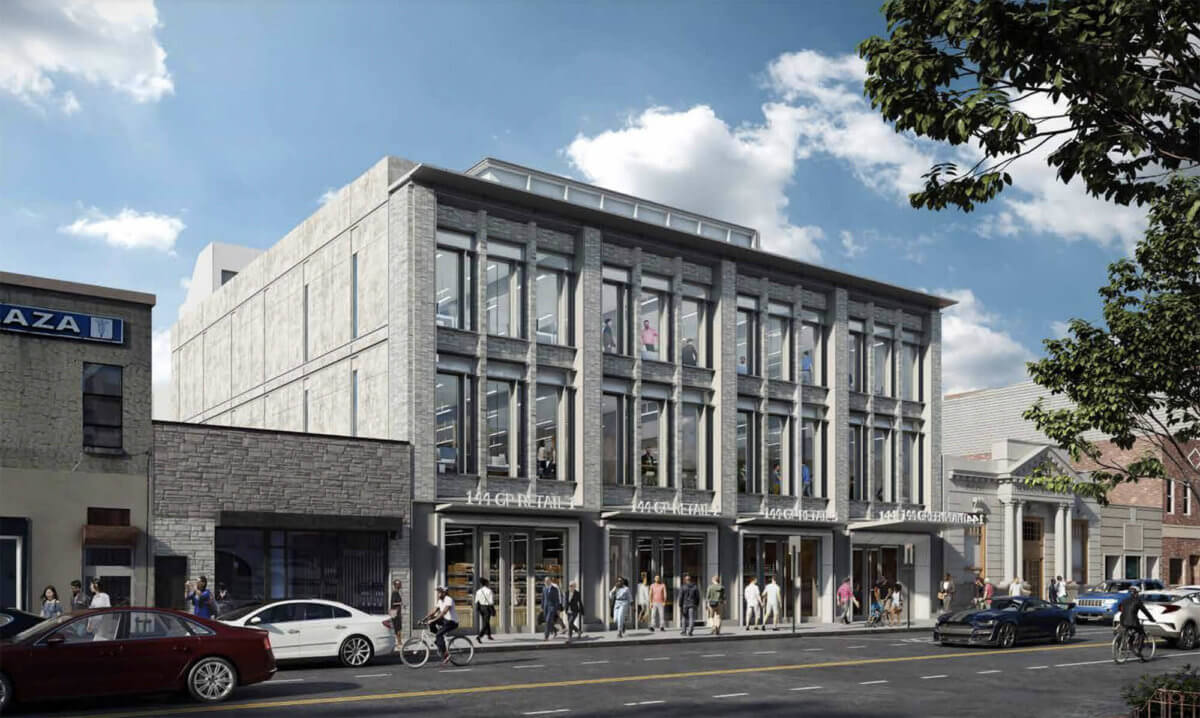 An old rendering of the new development. The fourth story bulkhead will now be reduced in size due to LPC commissioner requests.
Image via PBDW

The plans for the redevelopment were first brought before the commission in November, where the attorney and architect for the owners, 144 Point Break LLC, told commissioners they planned to do an interior gut renovation of the existing building, enlarge it to four stories and install a new facade that is modern but respectful of the fabric and character of the historic district.

“What we wanted to do here was to capture the spirit of this district, but to do it in a modern idiom. We did not think that simply borrowing historic pieces is really needed or appropriate to this in a way that relates to the district,” Dovell told commissioners of the design.

The circa 1898 structure located at 144 Greenpoint Avenue sits inside Greenpoint’s historic district, meaning any alterations to the building need to be approved by LPC.

At the November hearing, architect for the project Ray Dovell of PBDW said the building had been significantly altered over time and no historic fabric or ornamentation remained behind the facade. He said the new development would keep the original structure as much as possible and the team will do their best to “reuse all of the existing structure and then we will use it to convert for the new components.”

At the time, commissioners largely supported the proposal for the four story gray brick building but had issues with some design elements, most notably the size of the fourth floor penthouse and bulkhead, and the marquees and signage that were planned for above the ground floor storefronts.

Meanwhile, the community voiced concerns about the design being too generic to replace a building that had become an “unofficial landmark” in Greenpoint.

“This proposal is inappropriately generic in relation to the visual interest of the existing building and two other purpose built commercial structures in the Greenpoint Historic District,” Lucie Levine of the preservation nonprofit Historic Districts Council told commissioners at the November hearing.

“The Polonaise is an unofficial landmark in Greenpoint, and the visual anchor of the neighborhood,” she said. “It would do damage to the neighborhood, the streetscape, and the historic district to replace it with a design that lacks a similar level of architectural interest.”

The developers returned updated plans to the commission that reduced the size of the fourth floor penthouse and bulkhead to make it less visible from the ground level, eliminated the marquees from above the three retail bays, and reduced the depth of the lobby marquee by three feet. They also reduced the size of the lettering to be used on the signage. However, they did not significantly change the look of the building or address the community’s concerns about a lack of creativity and uniqueness.

Polonaise Terrace was originally built in 1898 by Charles Heidelberger and designed by Wilson and Dassau. Over the years, the cornices and other original detailing have been removed. It opened as Polonaise Terrace in 1961, and by the time it was designated as part of Greenpoint’s historic district it had been covered with a blind arcade of aluminum, and a false front of stucco and aluminum had been erected over the two-story portion.

Polonaise Terrace was a wedding and event space that predominantly served the area’s Polish community. After its closure in 2013, the building sat empty for three years. In 2016, after being kicked out of their Williamsburg location to make way for a new BMW store, Brooklyn Bazaar moved into the flamboyant space. Brooklyn Bazaar stayed at the location until November 2019, when the landlord at the time refused to negotiate beyond a month-to-month lease, Brooklyn Bazaar owners Belvy Klein and Aaron Broudo said in a statement reported in Brooklyn Vegan and other outlets at the time.

According to Department of Building records, the LLC has filed for an alteration permit to convert the building into a larger retail and commercial space, but the permit is yet to be granted.