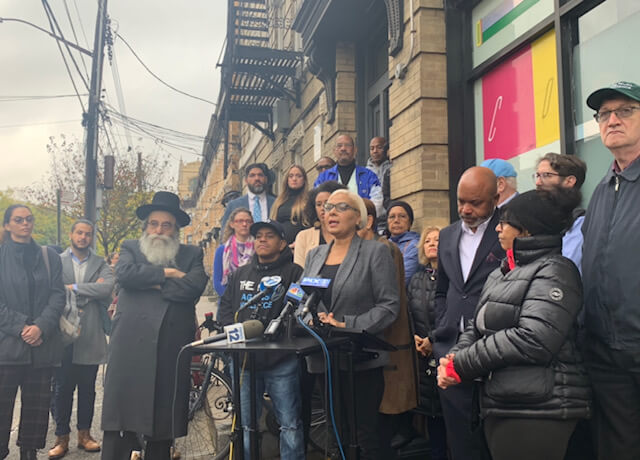 A number of North Brooklyn politicians gathered in Bushwick on Tuesday morning to raise the alarm after seven cars were vandalized and a building was spray-painted with the words “Kill Elected Officials” over the weekend.

The tag appeared on the side of a building on Willoughby Avenue between Wyckoff and St. Nicholas avenues late last week, according to the New York City Police Department, who received a report about the message last Friday afternoon, Oct. 29. Seven cars parked on the street had also been vandalized — their windows and windshields smashed.

The threat behind a graffiti message

Assemblymember Maritza Davila, who has represented the area in the state legislature since 2013, heard about the incident early on Saturday morning, she told Brooklyn Paper.

“That’s when I became increasingly concerned about it,” Davila said. “I was actually angry at it, that people are being targeted and I was not going to stand idle and let this happen and not talk about it.”

The message felt particularly anxiety-inducing just a day after a man broke into the San Francisco home of House Speaker Nancy Pelosi, Davila said. The suspect, David DePape, was reportedly searching for the Speaker, who wasn’t home at the time, and allegedly told her husband, Paul Pelosi, that he wanted to “take out” government leaders.

“Of course your first reaction would be, ‘Oh my god, with everything that’s happening around the nation, you can’t help but to [think] …  listen, if they infiltrated the White House, who are we?” Davila said.

She immediately decided to gather a group of local politicians and organizations to raise awareness of the incident and bring the community back together as a unit, she said. She was joined at the Nov. 1 press conference by U.S. Rep. Nydia Velázquez, councilmember Sandy Nurse, and more, as well as local organizations including El Puente and the United Jewish Organizations.

“We do work very hard, and we should not be anybody’s target,” Davila said.

Members of the Bushwick community turned out to support their elected officials and voice their concerns about quality-of-life issues in the nabe. Residents have been frustrated with a boom in nightclubs and other venues in Bushwick — they’re loud, draw in large crowds, and discharge often-drunk patrons who sometimes behave badly in the middle of the night, Davila said. She thought one of those patrons could have been the source of the wrecked cars and threatening message.

“The nightlife scene in the last three years has grown exponentially, to the point where I don’t know how new businesses get approved for liquor license …” said local resident Kimberly Wharton at the press conference. “It stressful and drunken chaos … it’s the matter of respect for the people who live here.”

An investigation of the incident is ongoing, and no arrests had been made as of Nov. 1, an NYPD representative told Brooklyn Paper. The city quickly painted over the graffiti.

Davila said she wanted to gather her fellow politicians and Bushwick residents together to show a united front and demand that locals be treated with respect by their neighbors and visitors. They — and the politicians who represent them — have the right to feel safe in their neighborhood.

“Also, to the person that wrote it, it’s like, ‘Listen, if you thin you’re going to get away with something, you’re not,'” the assemblymember added. “We will pursue this until we find the person that did this.”

‘Call out this behavior … and condemn it in the strongest terms.’

Nurse said the Republican party is “responsible for creating this hate-filled climate,” and her colleagues similarly called on the party to address violence and threats by officials and supporters. Republican representatives and hopefuls in the upcoming midterm elections poked fun at the break-in and spread misinformation online in the days following the attack.

“I am outraged and deeply heartbroken by the outbreaks of violence and vandalism in recent days against elected officials, including right here in the Bushwick community,” Velázquez said. “These attacks do not represent who we are as New Yorkers and we cannot let it define or intimidate us. It is incumbent upon my Republican colleagues to call out this behavior in their own party and condemn it in the strongest terms.”

Davila said her office has been working with the 83rd Precinct and the police commissioner to ensure her safety and that of her colleagues, and to think of more wide-ranging solutions like cracking down on cleaning up graffiti or working to make nightlife safer for everyone involved.

While the threat did shake her, Davila said she has never felt fearful in Bushwick — even when she lived in the nabe in the 70s, 80s, and 90s, which she recalled as tougher times. The community has always been wonderful and is now a vibrant and welcoming place, she said. Still, the scrawled message felt different.