The fix is in: Bklyn Bridge repairs to cost much more 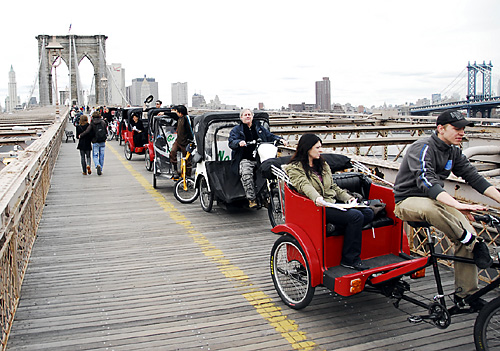 Pedicabs traveled from City Hall to Borough Hall last week to promote expansion of the service beyond Manhattan.
The Brooklyn Paper / Tom Callan

Major repairs to the crumbling Brooklyn Bridge, which are scheduled to begin this summer and close parts of the span for three years, will now cost up to $200 million more than originally anticipated.

Rehabbing the degrading bridge will cost up to $500 million, according to the Department of Transportation — a hike from the $300 million that the agency said it would need to fix approaches, ramps and anchorages, repaint the bridge and replace barriers and railings, the New York Post reported on Sunday.

On the plus side, the agency now says the work will take three years instead of four.

The work became a priority after state inspectors in 2006 reported its condition was “poor.” The 126-year-old suspension span was the only city bridge to receive that grade, despite a the wave of inspections that followed the 2007 collapse of a highway bridge in Minnesota.

Starting in 2010, John Roebling’s masterpiece will be closed to Manhattan-bound traffic for 24 weekends scattered through 2013, when the overhaul is scheduled to finish. A lane in both directions will also be closed during some off-peak hours on weekdays.

The need to repair the Brooklyn Bridge has pitted the Department of Transportation against the state Brooklyn Bridge Park Development Corporation over a piece of land beneath the Gothic tower. The park builders planned to convert the site into a grand public plaza, possibly with a skating rink and green market, by the end of this year.

But the city has not ceded control of the plot, which housed the historic Purchase Building, because it says the terrain is needed for the repair work on the bridge itself.