The hits and misses of the UniverSoul Circus • Brooklyn Paper

The hits and misses of the UniverSoul Circus 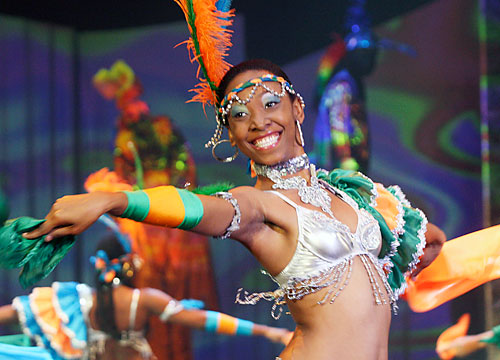 Don't forget the return of the UniverSoul Circus in Prospect Park.
Kevin Anderson

The news that the Bloomberg Administration is bringing the Ringling Bros. and Barnum & Bailey circus to town didn’t impress me at all: Brooklyn already has a circus every spring in Prospect Park.

Our homegrown version, the UniverSoul Circus, delights thousands of kids during its April runs at the Wollman Rink. For the most part, the troupe does a good job, but my visit last week revealed flaws and quirks that will forever keep it in the shadows of the better-known spectacles.

First, the good news: precision riding performers were outstanding, if too quick to leave the stage; a tumbling troupe called “the Soul Emperors” flipped each other around like they were rag dolls; an act involving two performers on a giant rotating pendulum was practically death-defying. And the best news is that no seat is more than 20 rows from the action.

But those highlights were lost in a sea of missed opportunities: a “high-wire” troupe called the China Soul Flyers were surprisingly dull; an overly long portion of Act II features stilt walkers and costumed dancers straight out of the Labor Day carnival parade on Eastern Parkway; a vase-juggling act is undermined by the fact that the juggler’s decolletage was far more interesting than her lackluster tossing; and the volume (not to mention the quality) of the piped-in music is so low that I found myself thinking that one must usually slip a quarter into a game of Frogger to hear such a discordant collection of notes.

What’s more, where other cirques — I’m thinking of the aforementioned Brothers Ringling or the Big Apple Circus — exist in a timeless zone of acrobatic feats, animal husbandry and legerdemain, UniverSoul is defiantly in the present.

This is one of the troupe’s strengths — audience members feel connected to the modern tone (and, judging by the applause, the frequent use of Obama posters) — but also one of its weaknesses. For every traditional circus act in the UniverSoul presentation, there is a jarring reminder of the current events going on just outside the big top.

A funny magician’s routine was marred, for example, when two scantily clad women of the night get into a fight over the magician’s affections. An act by the “Grandma”-like clown quickly dissolves into a parody of Beyonce’s “Single Ladies (Put a Ring on It).” More Obama imagery precedes a routine by two rubber-bodied kid contortionists whose act had nothing to do with politics (except for the bending over backward part, perhaps).

The result is a crazy mixed-up show that doesn’t know whether it wants to embrace 600 years of circus traditions or distance itself from them. Do you have a good time? Of course. But at what cost?