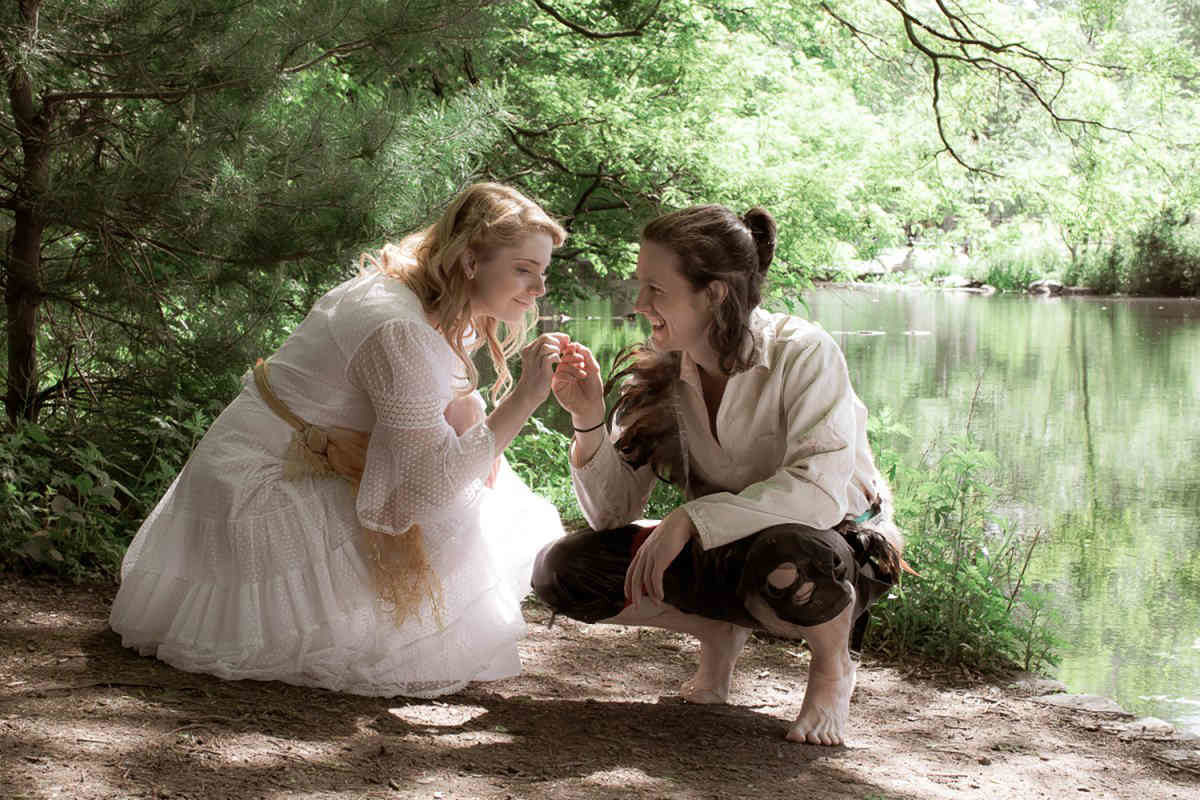 It will be Pan-tastic: Piper Theatre’s production of “Wendy Darling and Peter Pan,” opening at the Old Stone House on July 5, focuses more on Wendy’s journey than on the boy who wouldn’t grow up.
Jeremy Amar

It is a show with a high-flying concept!

Park Slope will transform into Neverland next week for the new play “Wendy Darling and Peter Pan,” debuting at the Old Stone House on July 5. The outdoor production weaves together several different adaptations of J.M. Barrie’s 1904 play “Peter Pan” and his 1911 novel “Peter and Wendy” to create a beautiful performance that is just as enthralling for youngsters as it is for adults, said the show’s director.

“It’s great for kids and really smart for adults — hopefully it’s going to appeal to a lot of people,” said John McEneny, who lives in Park Slope. “What we do is combine the different versions, and use stage directions, which gave really interesting psychological insights into the different characters.”

The play focuses less on Peter, the boy who wouldn’t grow up, and more on the life of Wendy Darling, the only one who can remember the pandemonium of their adventures in Neverland. This shift makes the story about growing up, memory, and nostalgia, and is sure to bring tears to the eyes of its viewers, said McEneny.

“Our story involves storytellers telling the story of Wendy Darling and gives people insight into Wendy — a much more dynamic, interesting character,” he said. “At the end of the day, everybody else can’t remember — including Peter and her brothers — and she alone has to live with this story. It’s really very smart and also sort of sad. It becomes more a story about memory and losing memory.”

The show, which runs Thursdays through Saturdays until July 21, features 10 actors. The youngest star is just shy of 10 years old, and the oldest is 60, making a truly multi-generational cast, said McEneny. The production also features non-human characters portrayed by puppets designed by Cody Grey, including one of the Darling family dog Nana, which the kids will love, said McEneny.

“We had Cody Grey design pretty much the best Nana puppet you’ve ever see,” he said. “We also have strange birds from Neverland.”

Musician Mark Galinovsky will play an original score he composed just for the production, live during each performances, said McEneny.

The Piper Theatre production will also include the play’s famous flying scenes, using a combination of props and clever choreography to send Peter, Wendy, and her brothers soaring over a panorama of London and the many locations of Neverland, said McEneny.

“It’s going to be beautiful. We have about 50, 60 crates we’re using to create all the different worlds of the play — creating all distinct worlds, lagoons, pirate ships,” he said. “They will be lifting each other, conveying movement through the area — soaring, flying. The audience will totally believe the actors are flying.” “Wendy Darling and Peter Pan” at the Old Stone House (Fourth Avenue and Third Street in Park Slope, www.pipertheatre.org). July 5–21; Thu–Sat at 8 pm. Free. In Neverland: Eliza Shea and Caleb Donahoe play the title characters in “Wendy Darling and Peter Pan,” a new adaptation of the J.M. Barrie story opening at the Old Stone House on July 5.
Jeremy Amar