Today is Junior’s birthday — but you get the cake! 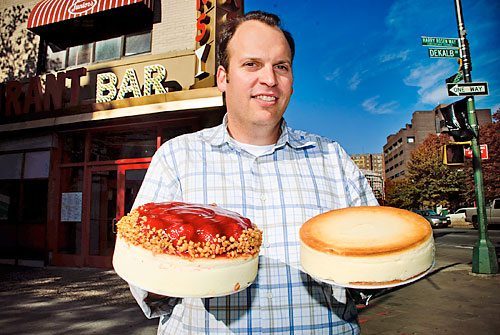 It’s been over 40 years since a slice of Junior’s signature dessert — a deliciously rich and creamy cheesecake — cost only 60 cents.

But that’s the bargain being offered today when one of Brooklyn’s most revered restaurants celebrates its 60th anniversary.

“It’s amazing to me that we’ve been around for 60 years,” said Alan Rosen, whose grandfather started the family-run restaurant. “I can’t take the credit. How many businesses can live that long? It’s a testament to my father, my uncle and my grandfather.”

Now, Rosen is giving back to his thousands of loyal customers by offering the cheap slice of cheesecake. On top of that, diners get a free slice of the dessert with a lunch or dinner entrée. Lastly, a special anniversary cheesecake covered in chocolate with a Junior’s logo in the center will sell for $19.50 — a price that harks back to the year the eatery opened.

“What would a party be without cake?” Rosen said.

The story behind Junior’s is a classic rags-to-riches tale.

Rosen’s grandfather, Harry, grew up working at various luncheonettes around the Lower East Side.

“His mother made him squirrel away money each week,” said Rosen. “When he was 20, he bought his first luncheonette.”

Just in time for the Depression! Once the economy tanked, Harry had to sell the five restaurants he owned — except for one at the corner of Flatbush and DeKalb avenues.

From the beginning, the Rosens recognized that they needed a signature dish, so they began scouting the cheesecake competition.

“My grandfather said if we’re going to be a great restaurant we have to serve great cheesecake,” Rosen said. “So they literally went around town, tasted cheesecakes and did experiments.”

By 1973, Junior’s was recognized as the best cheesecake joint in town.

Rosen added that the restaurant had seen that stretch of the Fulton Mall go through good and times and bad since it first opened.

“There were some tough times in the 1970s,” said Rosen. “But we’re fortunate we’re still here. We never gave up on Brooklyn.”

Rosen attributed the success in part to the ambience at the restaurant, which has a small-town charm to it.

“We have customers that have seen me since I was 5-years-old,” he said. “They know me well enough to say, ‘Oh, you’ve gained weight!’”

And visitors to Junior’s on Tuesday can expect to put on a few extra pounds, too.

Junior’s 60th anniversary [386 Flatbush Avenue Ext. at DeKalb Avenue in Downtown, (718) 852-5257] on Tuesday, Nov. 2. Cheesecake bargains run all day. There will also be a cheesecake bake-off judged by Borough President Markowitz and others at 2 pm.