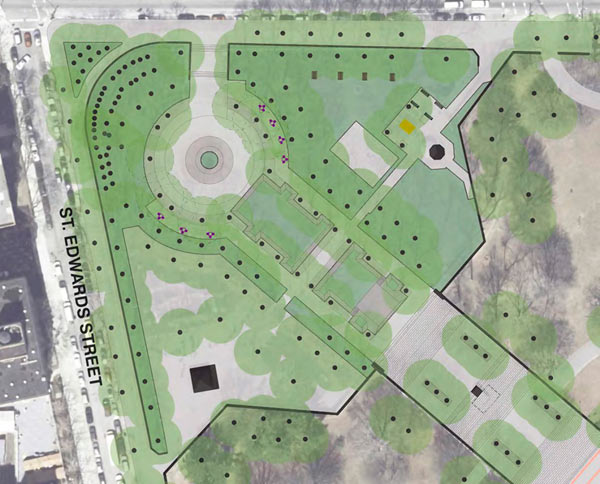 Now: This is what the Myrtle Avenue entrance to Fort Greene Park currently looks like.
NYC Parks

They’re sowing the seeds of discord.

The Community Board 2 parks committee voted to approve a controversial plan to makeover a heavily-used entrance to Fort Greene Park on June 19, despite objections from residents who said locals — many of whom live in nearby public housing complexes — could not weigh in because the meeting’s agenda was announced just four days before it.

“The community ought to hold a scheduled public hearing in the fall where there will be plenty of notice and people can come,” said Fort Greene resident Enid Braun. “You may love the design, but many of us don’t. How can this board make this decision without hearing from the stakeholders?”

The parks committee voted 5–0 with one abstention to approve a $10.5 million plan that includes a new entrance at the corner of Myrtle Avenue and St. Edwards Street with a water feature and grand sidewalk leading to the Prison Ship Martyrs’ Monument. It also includes removing trees, cutting out chunks of the stone wall surrounding the meadow to accommodate two 10-foot-wide ramps, doubling the size of the barbecue area, resurfacing the basketball courts, adding lighting, and fixing the sidewalk, according to landscape architect Paul Kidonakis.

Park honchos are revamping the green space with money it received through Parks Without Borders, a program to make meadows more inviting, and funds from Borough President Adams and Councilwoman Laurie Cumbo (D–Clinton Hill).

But residents say the cash should go towards other improvements, instead being earmarked to construct a fancy front yard for people moving into the swanky new developments nearby.

“The slick language we heard here tonight to make parks more inviting is absurd. I don’t know anyone who is scared to go to Fort Greene Park because there isn’t a flower bed,” said Fort Greene resident Joe Gonzalez.

The agency’s first iteration of the plan, which it revealed in February after meeting with locals in November of last year, drew criticism from residents who called it a waste of money. It held another public meeting in May at the nearby Ingersoll Houses community center, where denizens demanded that green honchos not gentrify their park, which many said they consider as their own backyard.

The Brooklyn Parks Department Commissioner told residents then that he planned to present final proposals in June or September, but the agenda for the June 19 parks committee meeting was only released on June 15, making it impossible for many to attend.

The president of the Walt Whitman Houses Tenant Association said she would have gone, but because the meeting fell on the same night as her monthly tenant association gathering, she and a lot of residents at the public housing complex on Myrtle Ave. opposite the park didn’t show.

Cumbo, who had not seen the plan, demanded the agency postpone its vote until more community members could see it, and the advisory panel’s decision to move forward with its vote ignored the elected officials’ concern about the lack of input, a rep for the pol said.

“We would have liked to respond to a final design,” said Monica Abend, Cumbo’s chief of staff. “We believe it was rushed, and there wasn’t a lot of transparency. The Councilwoman’s opinion is being overlooked a bit.”

The head of the Historic Districts Council, an organization that advocates for the city’s historic nabes, also submitted a memo asking that the vote be pushed back, citing concerns about the historical authenticity of the plan.

And another architect in attendance slammed the final proposal as a disgrace to the park’s creators.

“It’s a desecration to all the original designers who worked on the park,” said Michael Godkin.

The architects intended for people to stumble upon the staircase to the monument, Godkin said, instead of being met with a walkway at the sidewalk. But Kidonakis defended his city-backed plan, arguing that creators wanted the staircase and monument to be observed from afar and up close.

The plan will next face the community board’s executive committee, which will vote on it at its June 26 meeting. But the panel’s decision is only advisory, and the parks department will make the final call.

The entire revamp should take 18 months, but the parks commissioner promised to split it into phases so the entire corner is not closed at once. Future plans: This is what it could look like, if approved by the executive committee.
NYC Parks