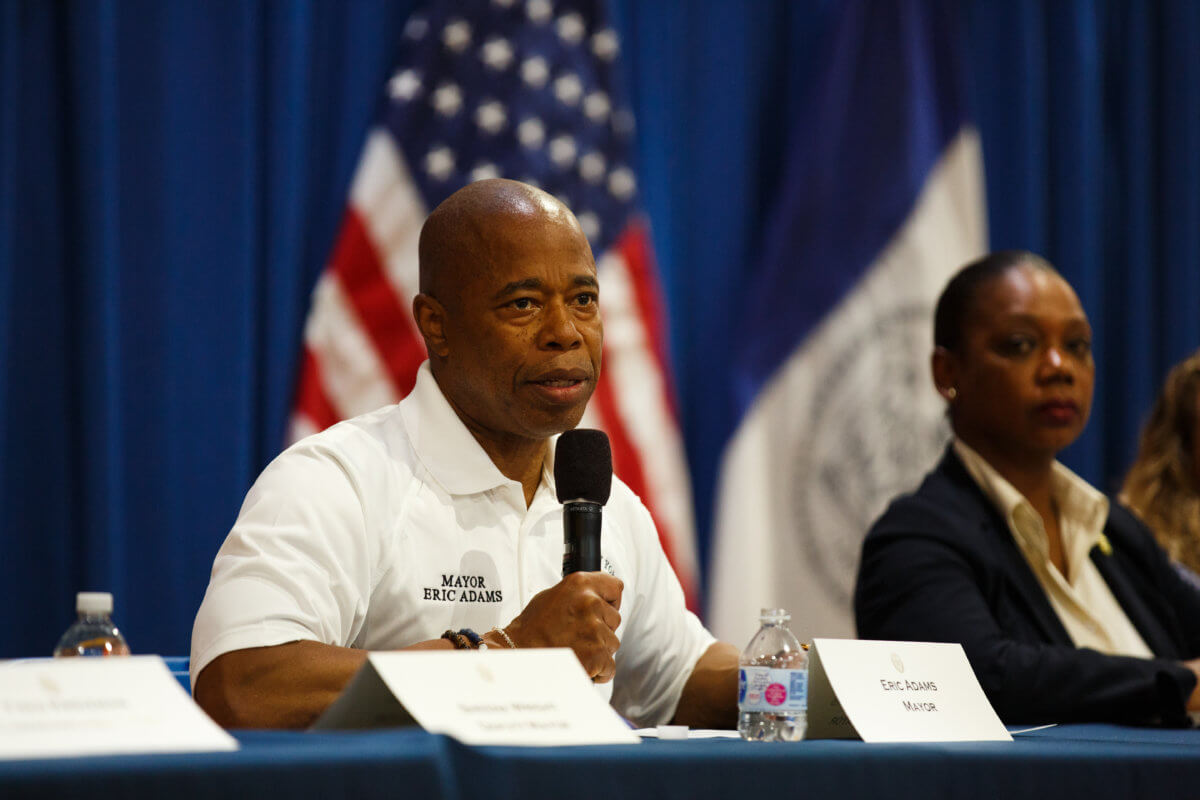 Mayor Eric Adams speaks during a community conversation on public safety at Boys and Girls High School on July 6, 2022.
Photo by Paul Frangipane

Mayor Eric Adams was in Bedford-Stuyvesant Wednesday night to hold the first of what he promises to be a series of  “community conversations” regarding public safety and gun violence in the city.

Adams led the town hall-esque meeting at the Boys and Girls High School on Fulton Street, where he and various agency honchos listened to residents’ concerns about public safety in their community.

The community at Boys and Girls High School is all too familiar with the toll of gun violence: back in February, a 14-year-old boy was shot right outside the school during final period. Citywide, 55 minors aged 18-and-under were the victims of homicide, according to NYPD data, including 20 from Brooklyn; that’s well above the 30 teens and children killed in 2020, and 41 killed in 2019.

Although the city remains far safer than it was during the “bad old days” of the late 20th century, the pandemic era has seen a well-documented rise in homicides in the Big Apple. A total of 488 people were murdered in the five boroughs in 2021, a 65% increase from a 2018 low of 295. Shootings with victims under 18 have increased this year, with 85 minor victims as of June 27 of this year, compared to 55 in the same time period last year, an NYPD spokesperson said.

As is seen all over the country, the victims are disproportionately people of color.

Dozens of local residents sat at roundtables in the school gymnasium and, one-by-one, posed their questions to the mayor and numerous other officials, including Police Commissioner Keechant Sewell, Schools Chancellor David Banks, Health Commissioner Ashwin Vasan, and Brooklyn District Attorney Eric Gonzalez. They touched on all manner of topics, from school safety to homelessness, after-school programming to the disparity of funding and attention for policing versus other issues.

The mayor’s oft-stated focus on improving public safety was at the forefront of the meeting, but more subtly, the presence of so many agency bigwigs also represented another oft-stated facet of Adams’ governing philosophy: that previous administrations were too “siloed” in their approach to problem-solving, and that issues like public safety require a unified front from all agencies working together.

“We’re saying it’s time for us to unify all of our assets and work as a team. Not these silos where everyone is territorial, and everyone is saying what’s not their problem. No!” the mayor said. “This is all of our problem, we’re all in this together and we need to use all of our resources to solve this problem.”

One table asked what they can do for the mayor to help get everyone to a point where they feel safe. Adams told those in attendance to get involved in their communities as much as they can.

Gonzalez agreed, adding that he hoped communities could continue to put their faith in local leaders.