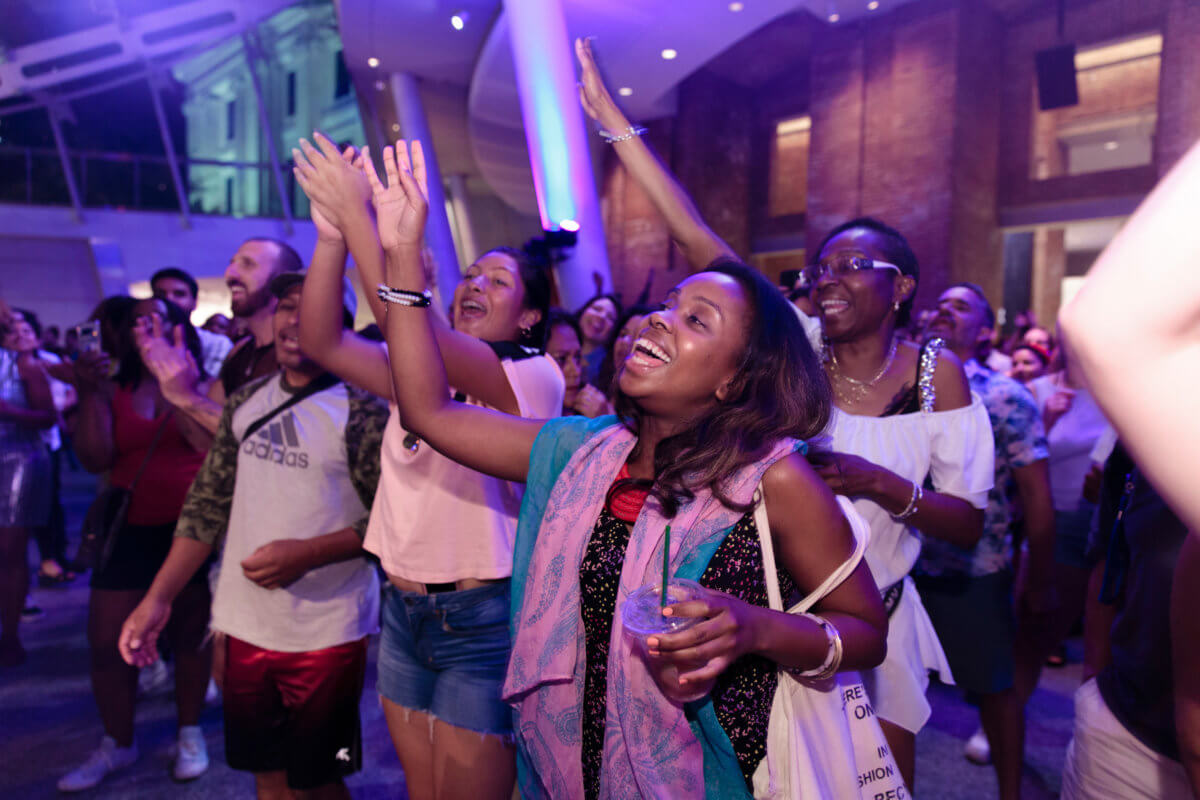 People dance at a First Saturdays event at the Brooklyn Museum in 2019. The event is coming back this weekend after a two-year hiatus.
Kolin Mendez/Brooklyn Museum

The Brooklyn Museum’s beloved free First Saturdays are coming back this weekend with free programs for all after a two-year hiatus.

On the first Saturday of every month for the last 24 years, the iconic Prospect Heights museum has opened its doors for an evening of completely free programming based around a particular theme or exhibition. Rather than just inviting Brooklynites in to wander the exhibitions, First Saturdays are packed with live music performances, lectures, archive tours, hands-on art projects, and more.

Like everything else, the Brooklyn Museum closed its doors just about two years ago, and, even when it reopened for in-person visits, First Saturdays stayed suspended. The popular program can draw a crowd of up to 10,000 people throughout the course of the day, said Lauren Zelaya, the museum’s Director of Public Programs.

“We had planned for First Saturdays to come back in February of 2022, and then we all know what happened, the Omicron variant,” Zelaya said. “We were just about to announce it and then we had to pause it. It’s been a long journey to get back here.”

As the surge in cases from the ferocious variant dropped, the team decided to bring back First Saturdays in April, with the same theme they’d planned for February – celebrating Black History Month, if a little late.

“That’s also been a cornerstone of First Saturdays, we’re in a historically Black neighborhood, there’s a lot of Black creatives we’d love to collaborate with in the neighborhood,” Zelaya said. “That’s why that was kind of the target date.”

Saturday’s jam-packed schedule is “a little light” in comparison to past First Saturdays, as the museum gets ready to wade back into the event after two years without it, and attendees have to pre-register in an effort to manage the number of people inside the museum at any one time. As of Tuesday afternoon, 8,000 people had registered to attend, though not all were guaranteed admission to the museum.

Even so, there’s no shortage of events. The evening begins with a live performance from musician Isa Reyes and continues with a Town Hall with the neighborhood’s new New York City Council members, Crystal Hudson, Chi Ossé, and Rita Joseph. If a politics aren’t of interest, there’s plenty else to do, from taking part in the finale of artist Mel Chin’s 14-year-long “Fundred Project,” sipping on a speciality cocktail crafted by local bar Ode to Babel, or attending pop-up talks on Black histories hosted by the museum’s Teen Apprentices.

As the evening begins to wind down, writers Quincy Scott Jones and Anastacia-Renée Tolbert will read selections from the anthology “The Future of Black: Afrofuturism, Black Comics, and Superhero Poetry” as part of Carnegie Hall’s Afrofuturism Festival.

“The aim of the program has always been to provide multiple modes of engagement for all ages,” Zelaya said. “It’s meant to be eclectic and have different entry points.”

For the past two years, Zelaya hasn’t been able to go anywhere in the borough and mention that she works for the Brooklyn Museum without being assailed with questions about the return of First Saturdays, she said. It’s been missed by the neighborhood, and it’s a boon for local businesses, Zelaya added, as the huge number of people heading to and from the museum stop to peruse a shop or get some dinner.

The end of the evening is a performance with The Lay Out, a local community group, along with artists Quiana Parks and Niara Sterling.

“We specifically reached out to them because they were a group that formed in response to both the racial uprising and also the pandemic, really the crises everyone was facing in 2020,” Zelaya said. “They started creating an outdoor event focusing on the wellness of Black people in Fort Greene Park.”

Even though the museum’s programming was sparse in 2020, the staff was still paying attention to what was going on in the community, Zelaya said, and wanted to acknowledge that.

“We just want to continue to honor the ways that people have, like, showed up for one another, made space, brought together like, joy, music, poetry,” she said. “That’s always been the goal of First Saturdays, expanding [to] different forms of art beyond just our four walls.”

The event is also important for providing a comfortable, free space for people and families, to engage with arts and culture — often an expensive endeavor. Some of her colleagues who grew up in the neighborhood recalled the Brooklyn Museum as one of the only public spaces they could go to feel independent without the fear of being kicked out.

“It’s definitely the heart and soul of the museum, as an institution, but also the cultural landscape of central Brooklyn and, I would say, New York City even more broadly,” Zelaya said. “And it’s a beloved event. “I hope that the museum can be a space for people to feel at ease and feel welcome and feel joyous. That’s really the goal.”