‘Our city and borough will have a partner’: Brooklyn politicos toast Biden’s inauguration 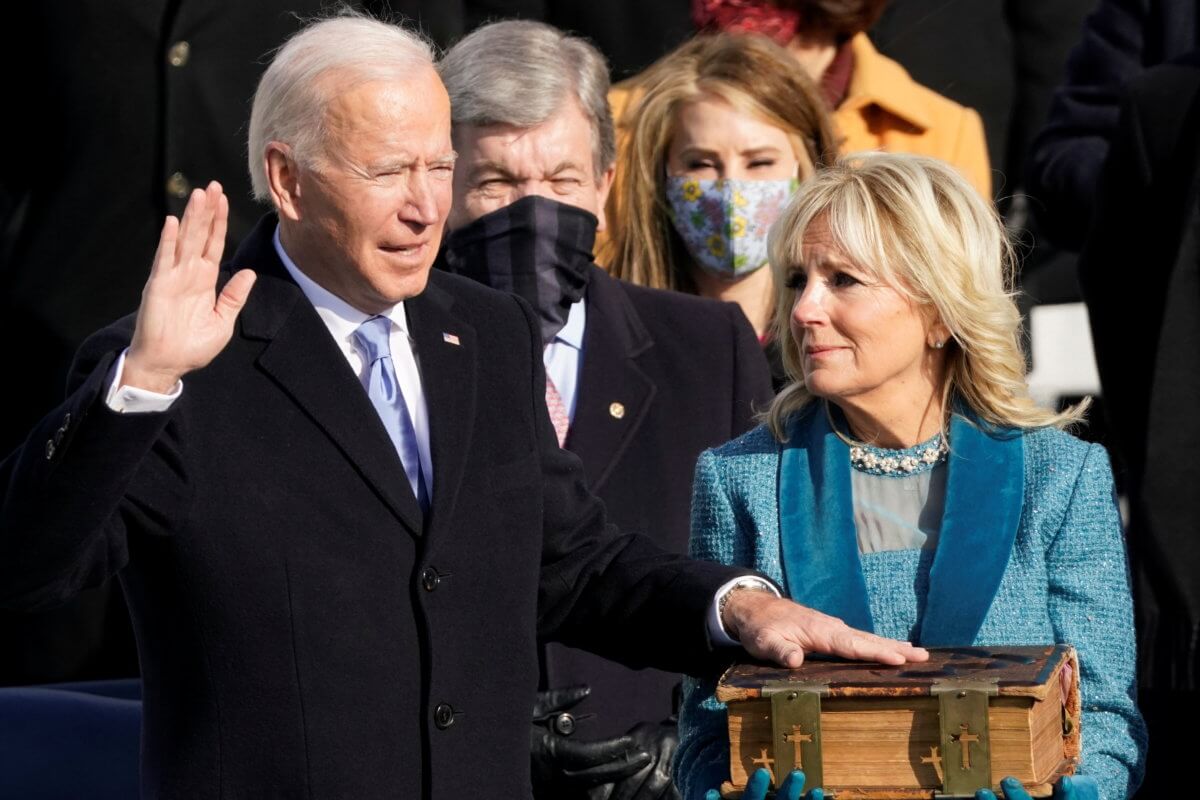 Joe Biden is sworn in as the 46th president of the United States by Chief Justice John Roberts as Jill Biden holds the Bible during the 59th Presidential Inauguration at the U.S. Capitol.
Andrew Harnik/Pool via REUTERS

Brooklyn’s Democratic bigwigs toasted the inauguration of President Joe Biden and Vice President Kamala Harris on Jan. 20, with local leaders hoping to turn the page on the chaotic era of Donald Trump.

With the departure of an administration hostile to the needs of urban communities like Brooklyn, leaders of the borough’s Democratic party expressed hope for a constructive relationship between local elected officials and federal leaders moving forward.

“Although there are still rough days ahead, there’s much to look forward to,” said Kings County Democratic Party Chair Rodneyse Bichotte. “With a cabinet and leadership team that looks like our country, the Biden/Harris administration means that our city and borough will have a partner.”

The newfound Democratic majority in the Senate means that Park Slope resident Chuck Schumer has assumed the role of majority leader of the chamber, making him one of the most powerful people in Washington. New York’s politicos hope Schumer’s ascendancy will mean more federal dollars for the city and state as it deals with an enormous budget shortfall that threatens essential services such as transit, education, and healthcare.

Congresswoman Yvette Clarke was among the members of Brooklyn’s delegation on hand for the inaugural ceremony — which she lauded as “historic.”

“I could not be more proud,” she said on Twitter, referring to the swearing in of Biden, and of the nation’s first female, Caribbean- and Indian-American vice president, Harris.

“It’s giving…#BlackGirlMagic,” she went on. “Love to see it!”

Today is a historic day for American Democracy. As we swear in #POTUS46 @JoeBiden, and our first Caribbean-Indian American female #VicePresident, @KamalaHarris I could not be more proud. It's giving… #BlackGirlMagic, love to see it! pic.twitter.com/5J5cVM6bHb

Heads of organizations like the Legal Aid Society also celebrated the end of the Trump presidency, and President Biden’s decision to immediately overturn a number of the former president’s immigration policies.

“Today signals a hopeful new day, one where we can begin to turn the page on an administration marked by its deliberate inhumanity and cruelty – from the xenophobic Muslim travel ban and the incalculably cruel family separation policy, to the unconstitutional raids on our courthouses and draconian changes to public charge and asylum eligibility, among so many other hate-filled policies,” said Hasan Shafiqullah, attorney-in-charge of the Immigration Law Unit at the Legal Aid Society.

Biden’s inauguration comes as the coronavirus pandemic keeps its grip on the country, with over 400,000 dead from COVID-19, millions out of work, and hundreds of thousands of small businesses shut down.

Brooklyn representatives said they hope the Biden administration will supercharge the country’s recovery after months of President Trump seemingly losing interest in the virus as cases and deaths surged and the economy faltered.

“House Democrats are excited and looking forward to continuing our work with President Biden and Vice President Harris to build back better for the people and make life better for everyday Americans,” said central Brooklyn representative Hakeem Jeffries. “Together, we will crush the virus, provide direct relief to everyday Americans who are struggling, and supercharge our economy so that we can create prosperity in every single zip code.”

The city’s lone Republican Congress member, southern Brooklyn Rep. Nicole Malliotakis, who earlier this month voted to object Arizona’s and Pennsylvania’s electoral votes and did not appear to be attendance at the inauguration, wished the nation’s 46th president well on social media.

“As a proud American who loves this country, I only want to see her succeed and prosper. I wish President Biden well and hope he is successful in doing good,” she wrote on Twitter. “I will work with his administration where there’s common ground but will also push back when actions hurt my constituents.”

As a proud American who loves this country🇺🇸 I only want to see her succeed and prosper. I wish President Biden well and hope he is successful in doing good. I will work with his administration where there’s common ground but will also push back when actions hurt my constituents.

In his inaugural address, Biden vowed to work for all Americans — whether they voted for him or not — and to work to bridge gaps that have divided the country in previous years.

“To overcome these challenges to restore the soul and secure the future of America requires so much more than words. It requires the most elusive of all things in a democracy: unity,” he said. “We must end this uncivil war that pits red against blue, rural versus urban, conservative versus liberal. We can do this — if we open our souls instead of hardening our hearts.”

In a later statement, Schumer swore that the Senate “will do business differently” than in recent years.

“Over the last four years, the previous administration took enormous steps backward,” he said, vowing to use executive orders to “undo the Trump regression.” “We must use every tool in our toolbox…to address the multiple crises we face, deliver immediate relief to American families and put us back on a path to a more prosperous and equitable country.”