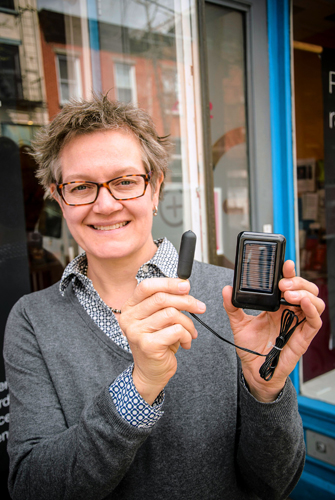 It has never been so easy to get up in years.

With its oversized aisles, whisper-quiet music, and bathrooms for customers on the go, Bergen Street sex-toy shop Babeland has been certified as a great place for senior citizens to shop, and has a gold star to prove it.

A new survey by a consortium of senior lovers has awarded the most discreet, most mature sex-toy shop imaginable its coveted “Age Friendly” (old age, that is) award in a quest to find the Park Slope shops that make it easy for oldsters to get exactly what they want.

The honor was a pleasant surprise to the one of the sensual shop’s owners, who couldn’t be more proud to keep geezers rolling in the hay well into their twilight years.

“I’m so into it,” said Claire Cavanah.

Age-Friendly Park Slope, a partnership including Councilman Brad Lander and senior service providers Heights & Hills, the Park Slope Center for Successful Aging, and Good Neighbors of Park Slope, is slapping gold stars on businesses throughout the neighborhood that provide stellar services and conveniences that leave seniors smiling all the way home.

And Babeland, located Between Fifth and Flatbush avenues, racked up points based on its public toilet and free delivery, in addition to adequate lighting and low noise levels.

The big-oh emporium was able to check off a majority of the survey’s senior-friendly boxes, although most of the benefits the Bergen Street whoopee shop provides are largely incidental to the upscale sex store’s mission to make buying vibrators fun for everyone, including Great Aunt Millie.

For instance, Babeland doesn’t play overly loud music — worth one point towards the senior-friendly certification — but that’s to allow for an ease of conversation between patrons and employees over the benefits of certain lubes, or the proper maintenance of silicon sex toys, according to Babeland spokeswoman Pamela Doan.

“Being able to speak easily is crucial to our business,” she said.

And the store’s wide aisles — earning Babeland another point — were designed for new moms, not grandmas, according to Doan.

“It was originally designed with strollers in mind,” said Doan. “But it’s ultimately easy for everyone.”

The sex-toy store does offer workshops specifically geared towards seniors, including a recent talk from “Naked at Our Age” author Joan Price, according to Doan.

With the award, Babeland joins the ranks of shops some would think more typical of a senior shopping spree, including Neergarrd Pharmacy on Seventh Avenue between President and Carroll streets, Juiceland on Ninth Street between Fifth and Sixth avenues, Brooks Vacuums and Sewing Machines on Seventh Avenue between 11th and 12th streets, and both Windsor Shoes locations — one on Fifth Avenue, and one on Prospect Park West.

Still, as senior-friendly as Babeland is, there’s still room for improvement, especially when it comes to making good vibes for elders, Doan said.

“It’s not like there’s a certain vibrators that are good for you if you’re over 70,” she said. “That’s not a thing.”