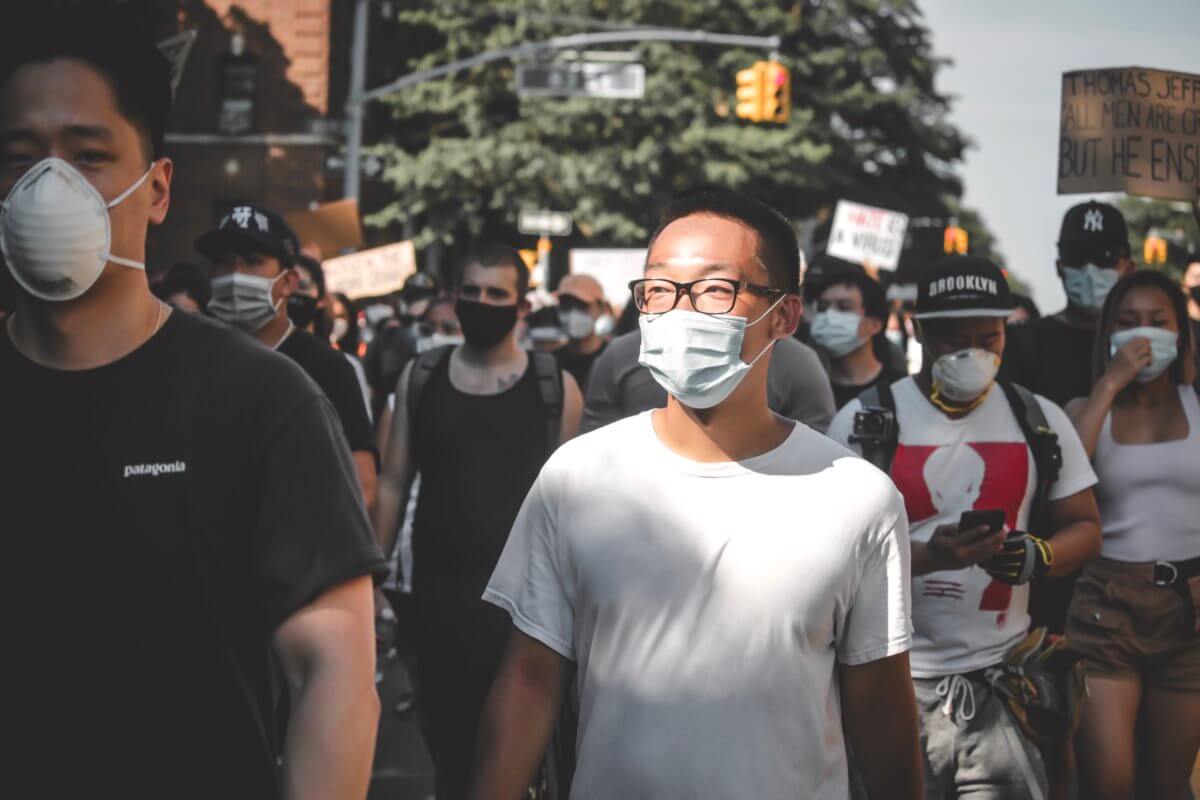 Protesters marched through Bensonhurst on Aug. 1 for the #TheyCantBurnUsAll march against a possibly racially-motivated attack on an 89-year-old Asian woman on July 14.
Cameron Blumberg

Hundreds of New Yorkers took the to the streets of Bensonhurst on Saturday to show their support for an 89-year-old Asian woman who was attacked by a stranger — and to condemn the police’s decision not to classify the incident as a hate crime.

“I said to myself, ‘This is too close to home, and enough is enough, and I have to do something about this,'” said China Mac, a Brooklyn-born rapper who helped organize the march. “We have to go into Brooklyn and take a stance and make people uncomfortable.”

The 89-year-old victim was approached by two unknown men on 77th Street and 16th Avenue shortly after she left her Bensonhurst home on the evening of July 14, authorities said. One assailant slapped her in the face, and moments later, her shirt was lit on fire by a match or a lighter, police said. The victim raised her hair and rubbed her back on a nearby wall to put out the flames, she told ABC7, preventing her from suffering serious injuries.

Police have made no arrests and an investigation remains ongoing, a police spokesman said. The incident had not been deemed a hate crime as of Aug. 4.

The attack — and the NYPD’s decision not to investigate it as a hate crime — sparked outrage throughout the Asian-American community, said actor William Lex Ham, who organized the march with China Mac.

“[Police] said it wasn’t a hate crime because there were no racial slurs that were said,” Ham said. “The woman doesn’t even speak English, so how could she know? This was an unprovoked attack.”

Ham, China Mac, and their mutual friend banded together to organize the Aug. 1 protest, called the #TheyCantBurnUsAll March, which was promoted on social media by stars such as actress Awkwafina and rapper MC Jin.

The demonstration, which drew supporters from as far as Philadelphia, began at Seth Low Playground at 1 pm. Speakers including China Mac, MC Jin, and Borough President Eric Adams blasted the attack on the elderly woman, and reaffirmed their support for Bensonhurst’s Asian community.

“We are not here to march [against] white people, Black people, Italian people, Spanish people,” said China Mac at the rally. “We are here to march against racism. This is not a race war.”

Following the remarks, more than 500 rally-goers marched to the 62nd Precinct on Bath Avenue by Bay 22nd Street, with demonstrators holding signs that said, “Hate is a virus” and “Bensonhurst against racism.”

One protester said that he was happy to see a diverse group come together to speak out against the police’s decision to not classify the assault a hate crime.

“If that wasn’t a hate crime, I don’t know what is,” said Jonathan Rampagoa, a 15-year-old high school student who once helped organize a protest at his Queens high school, Archbishop Molloy, against the administration’s alleged enablement of racism and discrimination.“[Saturday’s event] was a very, very peaceful protest and march. We made sure that the NYPD was there to witness us speak against them.”

Ham, a Queens native, said that the march aimed to uproot the stereotype that Asians are quiet and non-confrontational.

China Mac, born Raymond Yu, added that his 11-year prison sentence following his involvement in a gang shooting taught him to fight for himself and other Asians.

“I always stood up for the Asians in the prison. I made it my responsibility to stand up for them and to fight for them,” he said. “Culturally, we’ve been taught to not fight, to avoid problems and when things happen. That probably worked before, but it isn’t working now.”

The success of the Bensonhurst demonstration has inspired the organizers to host another rally against anti-Asian prejudice in Washington Square Park this coming Saturday, Ham said.

“To see all these people come out for our community was unbelievable,” he said. “It’s reinvigorating, this kind of pride in owning our voice.”