All the world’s a stage: Hoax worlds collide as artist Brian Whiteley, the man behind the Green-Wood Cemetery clown and the Prospect Park Bigfoot, poses in his Sasquatch suit holding a balloon.
Photo by Elizabeth Graham

The man behind a recent video purporting to show a Bigfoot sighting in Prospect Park is the same attention-seeker who disseminated images of himself skulking around Green-Wood Cemetery last summer dressed as a clown.

Fort Greene performance artist Brian Whiteley said he carried out the stunts — and e-mailed the documentation to reporters — as artistic acts that were supposed to provoke a reaction, not for laughs.

“I’m not trying to gain notoriety for a prank,” he said. “I want to do something that combines people on a universal level.”

The artist statement on his website is more blunt:

“I am not asking you to look, I am forcing you to pay attention.”

Whiteley shot and starred in the video, and sent it out to local news publications in late January using the pseudonym Russell Strark. He claimed to have been recording a time-lapse video of a snowstorm, and to have discovered the Sasquatch when reviewing the footage. He came clean to legendary reporter on the paranormal Lee Spiegel, of the Huffington Post, the following week.

Whiteley said he has a longstanding fascination with Bigfoot that has led him to dress up as the mythical creature in staged videos shot across the country, and to conduct interviews with Bigfoot “experts” and conspiracy theorists. In early videos, he said he walked too much like a human, but over time, driven by critiques from Bigfoot fans, he honed his hunched lurching. Whiteley’s Prospect Park video was not the first time he has attempted to use the press to spread fake Bigfoot sightings, but it garnered more notice than videos past, and he said he began to worry that true believers would misconstrue his intentions.

“I’m not really interested in pissing off the Bigfoot community,” he said. “My end goal is to get a wide variety of people’s opinions. I’m interested in the reaction to mystery.”

This isn’t Whiteley’s first 15 minutes of fame. His clown-costumed antics in Green-Wood Cemetery last summer drew the ire of commentators, who accused him of being insensitive to mourners, and just plain creepy.

“To the creators of the stunt, assuming that’s what it is: You’re the guy at the party who dumps a full beer on his own head or pees on the Christmas presents,” wrote Gothamist’s Lauren Evans. “Yes, you’ve commanded everyone’s attention, but we all think you’re a jagoff and no one wants to sleep with you. The Blair Witch Project came out in 1999! Go home.”

Whiteley would not confirm or deny that he was behind the cemetery clown, but until several days ago his website listed “Green-Wood Clown” as one of his performances. The entry was accompanied by the same clown photos picked up by news outlets. Shortly after this reporter asked Whiteley about the clowning around, the reference disappeared.

Some mysteries are better left unsolved. 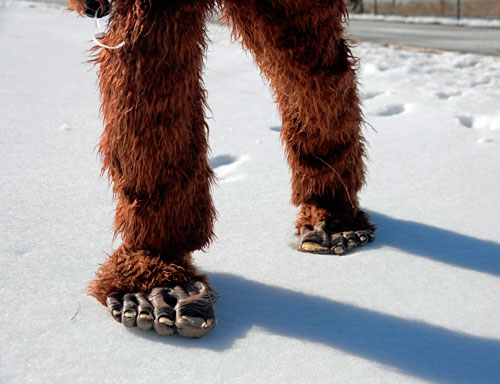 Big feet, all right: Say what you will about Whiteley’s art — it makes an impression.
Photo by Elizabeth Graham
Reach reporter Noah Hurowitz at nhuro‌[email protected]‌cnglo‌cal.com or by calling (718) 260–4505. Follow him on Twitter @noahhurowitz