Tearing down Century 21, a project that was ‘never meant to be’ 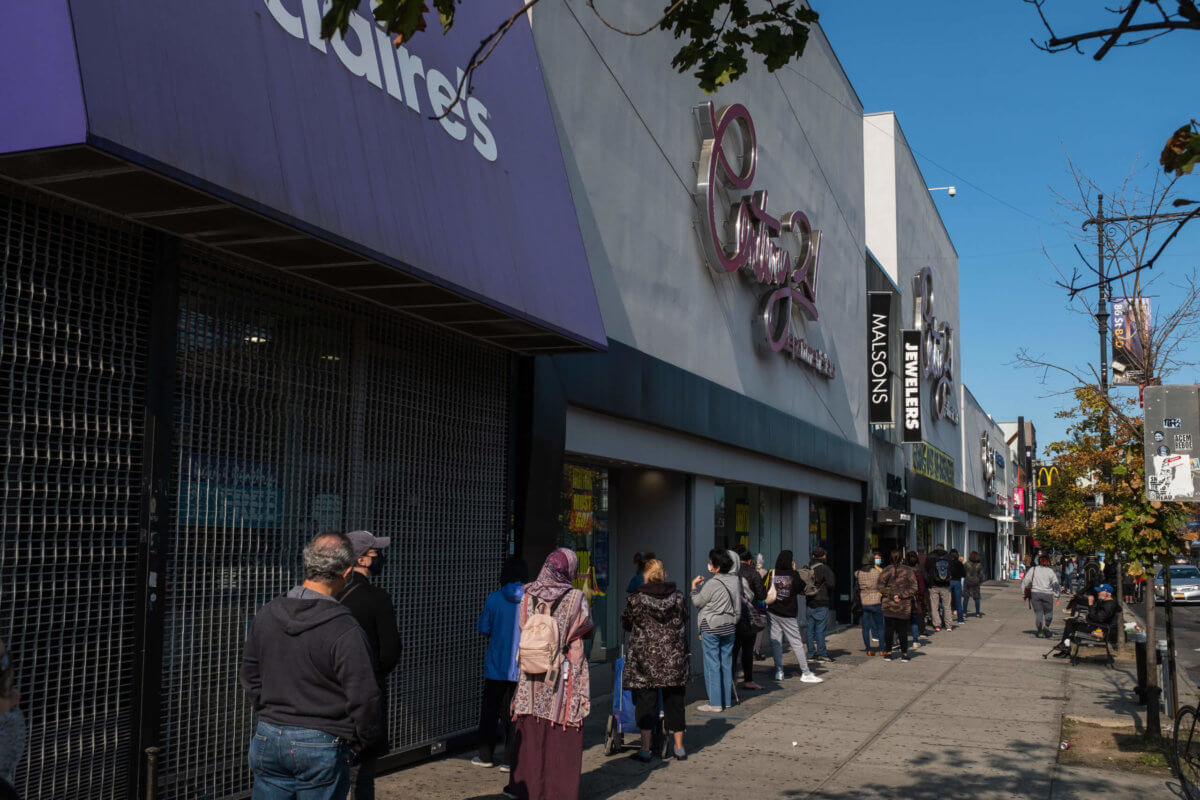 A line of people wait to shop at Century 21 before its closure in late 2020.
File photo by Paul Frangipane

When cousins Sonny and Al Gindi opened Century 21’s flagship location in 1961, they quickly learned they were onto something. The Bay Ridge department store gained popularity seemingly overnight due to its affordable pricing, and the Gindi family went on to open a dozen other locations — and expand its footprint on 86th Street by buying up property along the thoroughfare.

After more than 50 years, owners, citing a lack of COVID-related payout from their insurance company, filed for bankruptcy at the end of 2020, and the sprawling southern Brooklyn department store closed its doors. Though the closure left a hole in the hearts of Brooklynites, a coming demolition of the space promised to make room for new business that the shopping strip — still rebounding from the pandemic — has never seen before.

But, project leaders say it was never meant to be this way.

“Unfortunately, the pandemic with its overreaching impact in New York City, and the majority of their business being two stores in Brooklyn, two stores in Manhattan and one store in Queens, just devastated their business,” said Gene Spiegelman, vice chair and principal at RIPCO, the commercial real estate company managing Century 21’s demolition, and the space’s revitalization. “And the lack of post-recovery has kept them on the sidelines, and figuring out what to do with it in the future.”

After demolition permits were filed for 448 and 460 86th St., word of coming “Class A retail” began to spread — squashing rumors of a second-coming for the store — and 86th Street Business Improvement District head Pat Condren described as “short-term pain for long-term gain.”

“It was a very complicated infrastructure of buildings,” Spiegelman confirmed, “so a determination was made that new construction would be best.”

As is, Century 21 would fit multiple retailers, many of which have “very, very specific requirements” when choosing a new space — and so does the city. “There’s considerations towards all the regulations and all the new energy-efficiency codes that are coming into play, you know many different factors that new construction is the way to go,” he said.

“Century 21 was an amazing business, but it was an apparel business,” Spiegelman went on. “The new project is going to bring a variety of top-tier retail uses that will be welcomed by the community and really revitalize this core position of 86th Street in Bay Ridge, Dyker Heights and Sunset Park.”

Construction is set to begin in 2023, with an expected completion of late 2025, according to Spiegelman. RIPCO’s project also includes the former TJ Maxx store at 502 86th St., and a 290-car, multi-level parking garage just off the strip.

Spiegelmann said the “anchors” — stores that draw shoppers to the area — will be signed on before the project gets underway, but over time, RIPCO is hoping to lease out to retailers who do footwear, apparel, food and beverage and grocery.

“It’s going to be a more diversified mix [of retailers],” he told Brooklyn Paper. “Our goal is to bring a retail variety that has not been represented in Bay Ridge.”

The 150,000-square-foot development could cost as much as $45 million, Spiegelman told the Commercial Observer, which first reported on Century’s demolition, though that estimate is expected to change closer to the start of construction.

Speaking with Brooklyn Paper, the real estate guru urged local skeptics to remember that the family behind the project is the same family that’s been in the community’s corner all along.

“These are people who have been involved here for decades who had to blaze forward,” said Spiegelman of the Gindi family, who live in Bay Ridge. “They are going to be the owners forever, they have been long-term owners and plan to be longer-term owners.”

And Spiegelman should know — RIPCO has had a long-standing relationship with the Gindi family, and he himself worked as the real estate representative for Century 21’s properties over the course of the last decade.

“I have been through the best and the worst,” he said.