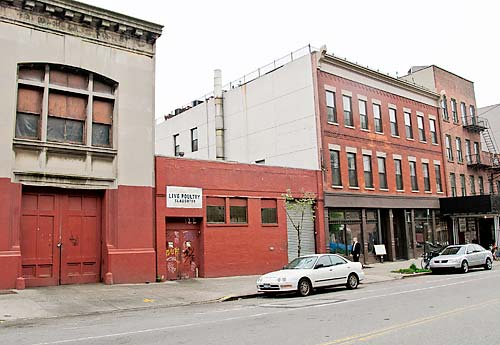 The live poultry market on Greenpoint Avenue (center) is next to an 11-unit building.
Photo by Stefano Giovannini

Why did the luxury condo tenant move across the road?

It’s not a stupid kids joke, but a oderiferous situation on Greenpoint Avenue, where residents of a converted historic building are moving out because they can’t stand the fowl smell and squawking from a neighboring slaughterhouse.

“It’s dirty, there’s always feathers flying around, and there’s a nasty smelling liquid that leaks out occasionally,” said Greenpoint Avenue resident Andrew Rodgers, who is moving out of his building, near Franklin Street, this month.

But the one-story factory, New Lee’s Live Poultry Market, has been a working slaughterhouse since 1928.

Rodgers is one of several tenants who felt caged in living above the killing factory. He said his broker “glossed over” the presence of the slaughterhouse when he looked at the place a year ago and allegedly suggested that the factory would be gone in a few months.

Rodgers and his neighbors have suffered from the smell and noise of factory workers, who unload metal crates with tasty ducks, chickens, and turkeys into the factory at 5 am every day.

Now, he’s put a homemade sign advertising a moving sale in his building’s storefront, which reads, “The chickens are driving me crazy!”

“This is a beautiful neighborhood and there’s this blight on the street,” said Rodgers. “It’s not a good place, it’s in the wrong place.”

The condo’s developer, Leonard Rutkowitz said New Lee’s owner John Chen wrote to him about a plan he hatched to move the factory to Johnson Street — but Chen blamed city regulations for delaying the move.

“It’s totally affected our business,” said Rutkowitz, who has been forced to convert his condo building to rentals because only four units sold. “One tenant moved in and then moved out after a month. We broke her lease.”

Chen even told the New York Times in 2009 that he might move, prompting one resident to predict the factory would definitely be gone before she ever left.

But it was Chen who played chicken and won — that resident moved out this month.

Calls made to New Lee’s were not returned.

Meanwhile, some in Greenpoint are blaming the residents, not the chicken man.

Blogger Miss Heather of New York Shitty pointed out that new residents must exercise “due diligence” before signing a lousy deal.

“I have heard from more than one person that sales agents shilling this property were telling prospective clients the slaughterhouse would be gone in six months,” she wrote. “Obviously, this didn’t happen.” Andrew Rogers is moving out of his Greenpoint Avenue apartment after discovering how smelly and loud the poultry slaughterhouse next door actually is.
Photo by Stefano Giovannini