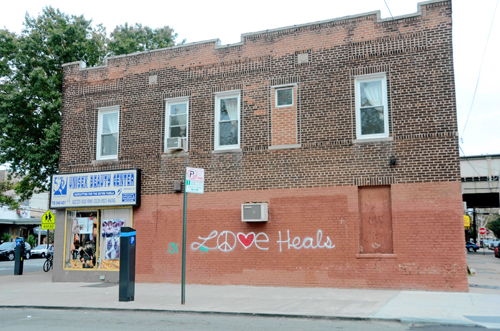 Lovin’ it: A graffiti artist scrawled “Love Heals” on the side of a building near the intersection of Avenue U and Van Sicklen Street in Gravesend, and the building owner says it’s the best graffiti the building — which has been in his family for more than 50-years — has ever seen.
Photo by Elizabeth Graham

The Love Vandal has moved west from his usual tagging grounds in Marine Park, and this time, a Gravesend property owner is praising the illicit artist for his words of love and affirmation.

“What can I say, it’s a positive thing,” said Alvo Alleva Jr., who owns the building on Avenue U between Lake Street and McDonald Avenue where the happy message appeared. “I’m not going to call and complain about it.”

The anonymous graffiti love-bomber painted “Love Heals,” on one side of Alleva’s building, where his wife’s Unisex Beauty Center has a salon.

The Love Vandal’s work was first spotted in Marine Park on Avenue S, where the graffiti artist wrote “Believe in Love” over a mural there, and can be identified by the stylized use of a peace sign and a red heart respectively in lieu of the “O” and “V” in love.

Alleva says that, while he never gave permission for the vandal to paint over his walls, its better than the spray-painted scribbles and tags that he often finds on his property.

“You usually get a bunch of squiggly lines and initials, which is just filth,” said Alleva. “Of all the graffiti I’ve had, that’s the only one that had any meaning to it.”

This new tag actually covers an earlier, more insidious one, where a vandal wrote the infamous Number of the Beast: “666.” Alleva says “Love Heals” is a big improvement.

In fact, the building owner said he’s so taken with the Love Vandal’s work, he’d happily invite him back to pickup where left off.

“If I got the guy back here, I would give him the whole wall,” Alleva said.

Alleva is currently enrolled in a city program called Graffiti Free NYC, which periodically sends painters to his building to cover up any graffiti they find, so chances are that “Love Heals” won’t be around for long.

Then again, there’s nothing more enticing for a graffiti artist than a freshly painted wall.

“They make a clean slate on it, but all it really does is make a nice billboard for the next graffiti artist,” said Alleva.