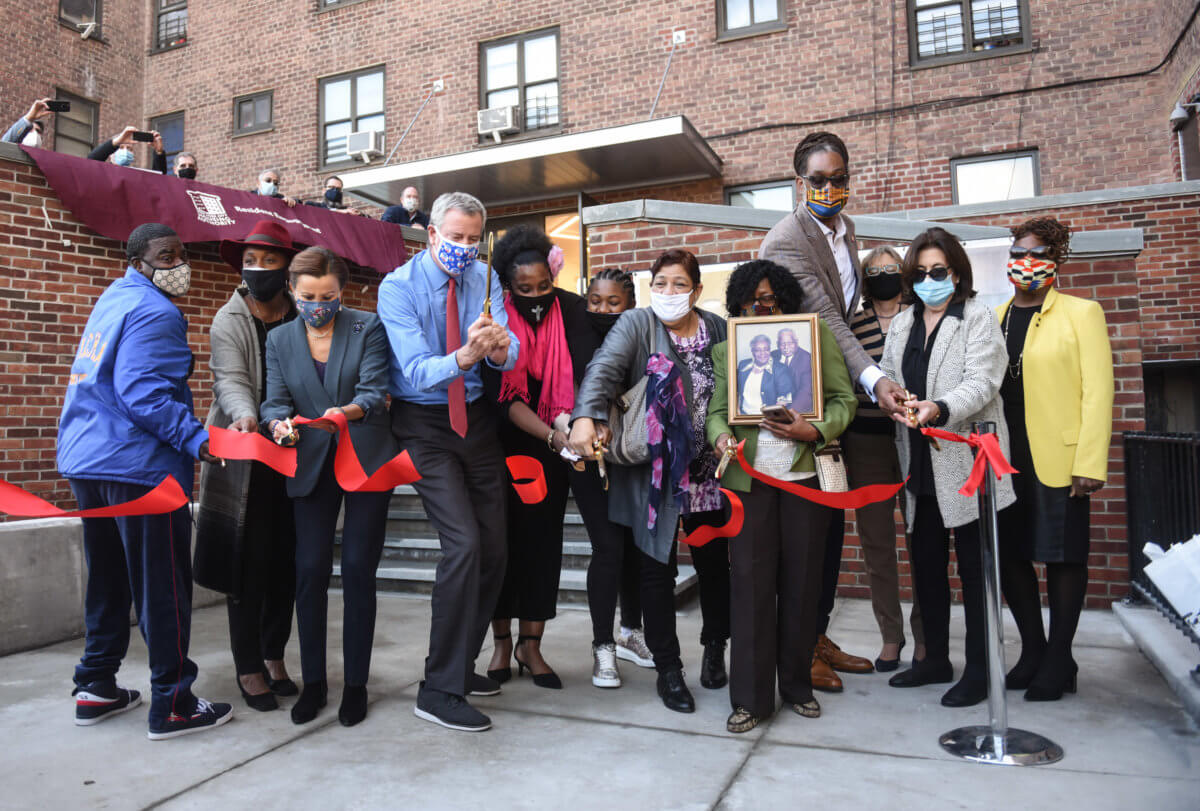 City leaders cut the ribbon on a new $14 million community center at Bedford-Stuyvesant’s Marcy Houses on Nov. 6, giving residents of the public housing complex a safe space to gather after 20 years without one.

“I’m really choked up about the idea that we are reinvesting in our community, and really sending a message to our young people that you are valued,” said Bedford-Stuyvesant Councilman Robert Cornegy. “When I talk to young people every day, the one thing they say to me every day no matter how they say it is they don’t feel valued.”

Completed after nearly two years of construction, the 3,200 square foot space at Marcy Avenue and Walton Street will house a pair of offices, two activity rooms, four bathrooms, and a community kitchen, which will allow for vital programs and services to foster the wellbeing of over 4,000 Marcy residents, said Mayor Bill de Blasio.

“What you see behind me is part of the rebirth of New York City,” de Blasio said outside the center on Friday. “You see rebirth coming to life!”

Funded partially with a $8.9 million grant from Cornegy, a $4.6 million allocation from the mayor, and a $1,050,000 allotment from Borough President Eric Adams, the new center — which was built atop an old Police Service Area and two former apartments — also comes equipped with new safety measures, fire systems, and internet hotspots.

“It is clear during these times of social and economic challenges that there is a great need for high-quality youth and family programming in Brooklyn,” said the organization’s head, Robert Cordero.

Comedian Tracy Morgan, a former resident of the nearby Tompkins Houses, became emotional at the Friday afternoon ribbon-cutting, saying the center would provide youth with a much-needed outlet to become successful members of society.

“I had people to talk to when I was feeling a certain way, that’s why I’m where I’m at now,” Morgan said after showing up to the event unannounced in a Rolls Royce. “When young people don’t have that, that’s why they end up pregnant at 16, or doing 25-to-life, they didn’t have nobody to talk to, they succumbed to the pressures of it.”

The opening of the new space also marked a personal journey for City Hall staffer Tahirah Moore, who grew up in the Marcy Houses and played a key role in seeing the project to its completion.

“When I was younger the community centers that we had were closed, and that’s when I felt my first pang of injustice,” Moore said. “To become an adult and play a role in getting it back is a prayer answered.”