Mr. Bloomberg, tear down this wall! 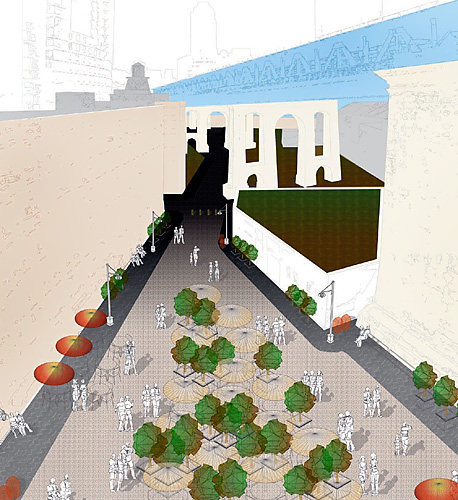 WEST DUMBO, March 13 — Allied forces announced today that the Wall must come down.

No, there hasn’t been a return to the Cold War, but partisans say that the Manhattan Bridge has become a “Berlin”-style wall cutting through the heart of DUMBO.

And two cultures — an East DUMBO and a West DUMBO, if you will — are slowly developing, complete with their “own set services: cleaners, cafes and even their own subway stations,” according to the DUMBO Improvement District.

Now the group wants to do something about this Checkpoint Charlie (without the barbed wire and machine guns). The first step, the group believes, is transforming the Pearl Street Triangle — an area bounded by Front, Water and Pearl street — from a neighborhood black hole of haphazard parking, uneven asphalt and partially covered-over cobblestones into a town square complete with a farmer’s market and pedestrian-only spaces.

“[We need] to tackle the mish-mosh of patch work asphalt, failed Belgian blocks and public parking,” the group said in a statement. “The area has a great potential to be revitalized into an enchanting public space as DUMBO’s town center.”

Perhaps the Improvement District is using Berlin — the real one — as an example. The German capital’s town square, Potsdamer Platz, was devastated during World War II, and then shut down when the Berlin Wall — the real one — was built through it.

But when the Wall came down, Potsdamer became a hot piece of real estate, and is now one of the busiest shopping, entertainment and tourism areas of Berlin.

Manhattan’s meatpacking district is also a good example of a successfully re-imagined industrial area. A decade ago, the only people to walk down the neighborhood’s streets were butchers and deliverymen. Now the area is fashionable, and boasts some of that outer borough’s highest rents.

But bringing down DUMBO’s wall could be harder than bringing down Communism (after all, we can’t simply tear down the Manhattan Bridge).

Much like Ronald Reagan telling Mikhail Gorbachev to “tear down this wall,” the Improvement District is also recommending that the Manhattan Bridge arch on Water Street — currently used by the Department of Transportation as a storage space for construction materials and maintenance crews — be re-opened as a pedestrian walkway.

But the Gorbachev in this extended metaphor, DOT spokesman Chris Gilbride, said that the agency has used that space for storage since the 1980s, and had no plans to reopen the arch anytime soon.

Still, Tucker Reed, the Improvement District’s executive director is hopeful. After all, Gorbachev turned out to be pretty cooperative in the end.

And in the meantime, the Improvement District wants the neighbors to come to a meeting next week to chime in with their own ideas about how to turn the Pearl Street Triangle from a Bermuda Triangle into a “Piazza san DUMBO.”

“We’re looking for ideas that will create green space in DUMBO that will be beneficial for both businesses and residents,” said the DUMBO Improvement District’s president, Tom Cohen.