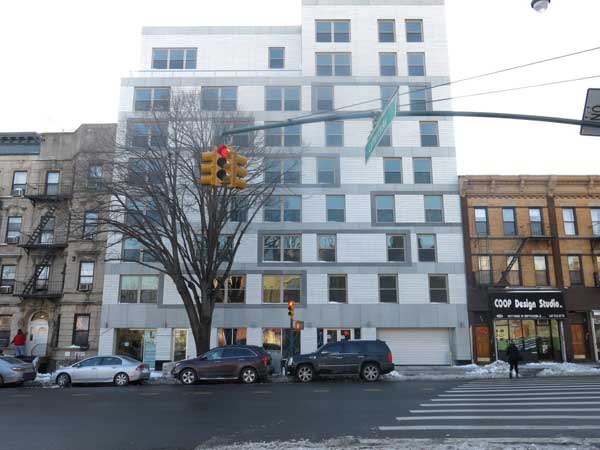 Foiled again: Party promoter Sonic Jungle cancelled its planned April 21 rager at 510 Flatbush Ave. the day before the event because the city refused to sign off on the necessary permits — the second year in a row officials cancelled an event by the outfit there due to improper paperwork.
Community News Group / Colin Mixson

It’s the number-two time officials pooped on this promoter’s party.

The city pulled the plug on an April 21 bash planned for the bottom floor of a Prospect-Lefferts Gardens residential building, denying the host’s second round of permit applications the day before the event.

Promoter Sonic Jungle — whose attempt to throw a rager at the then in-construction 510 Flatbush Ave. last year was foiled when this newspaper reported the outfit lacked the necessary permits — cancelled its so-called “eco-fashion show” hours before the soirée after the Brooklyn head of the Department of Buildings refused to allow the party on a “bullshit technicality,” according to organizers.

“They never mentioned the issue ever to us, when we first applied,” said Andrew Goldin, founder of Sonic Jungle. “Our architect could’ve fixed it any moment.”

But the Buildings Department’s Brooklyn Borough Commissioner rejected the promoter’s second request because the booze and live-music-packed affair defied regulations that stipulate the mixed-use building’s ground floor be reserved for a medical office, according agency spokeswoman Abigail Kunitz, who said its first application had the same problem.

Many residents, however, cheered news of the last-minute cancellation, after claiming their landlord refused to share any information about the bash leading up to it.

“Members of the tenants association were pretty happy it wasn’t happening,” said Jonathan Boucher. “We foresaw a lot of issues that weren’t addressed in terms so security and things like that.”

Sonic Jungle originally advertised the party as an overnight extravaganza from 8 pm to 6 am that would feature reiki-healing ceremonies, a mystic-tea lounge, guided meditations, an immersive aromatherapy experience, and a room full of fancy rocks, according Goldin.

“We’re going to have a really cool crystal room, with big crystals where people can sit around and meditate and feel the power of the earth,” he said.

Tickets to the wellness rager — which the promoters also billed as an “Earth Weekend” fund-raiser for Brooklyn Botanic Garden — included $100 Sustainability Superstar and $1,500 Eco Warrior passes, the latter buying revelers admission along with an herbal elixir, a private sound-meditation session before the party, private tours of a “secret underground street-art project,” a 30-minute massage, and two bottles of either mescal, rosé, Champagne, Grey Goose, or Patron.

But the hosts lacked the necessary permits days before the event, according to a Department of Buildings spokeswoman, who said the agency rejected the promoter’s initial application for a Temporary Place of Assembly certificate required for the bash — and for the pop-up gallery Sonic Jungle intended to run in the space for three months following it — because the roughly 2,631 folks the promoter planned for far surpassed the spot’s occupancy limit of a few dozen people.

Goldin claimed the Buildings Department received his second request more favorably, assuring on April 19 that it just needed a sign-off — and that the State Liquor Authority, which didn’t authorize serving booze at Sonic Jungle’s failed 2017 bash, did issue him a permit this year, which an authority rep confirmed.

The organizer said he also hired a security team and soundproofing expert ahead of the rager in order to minimize commotion, but his reassurances did little to soothe renters’ tensions with their landlord, who failed to keep them in the loop, according to another tenant.

“Nobody from management communicated with us,” said Scott Percelay. “I don’t know if there’s proper soundproofing or security measures. I don’t feel respected.”

Many residents only learned about the party from paint fumes and tobacco and marijuana stenches that wafted into their apartments as organizers worked to get the ground-floor space ready for the eco-fashionistas, according to Boucher.

“People organizing the event were spray painting, putting up graffiti art, and smoking cigarettes and pot, and the smell was filling the hallway of the main building,” he said. “Someone mentioned his apartment smelled of smoke and fumes from the spray paint.”