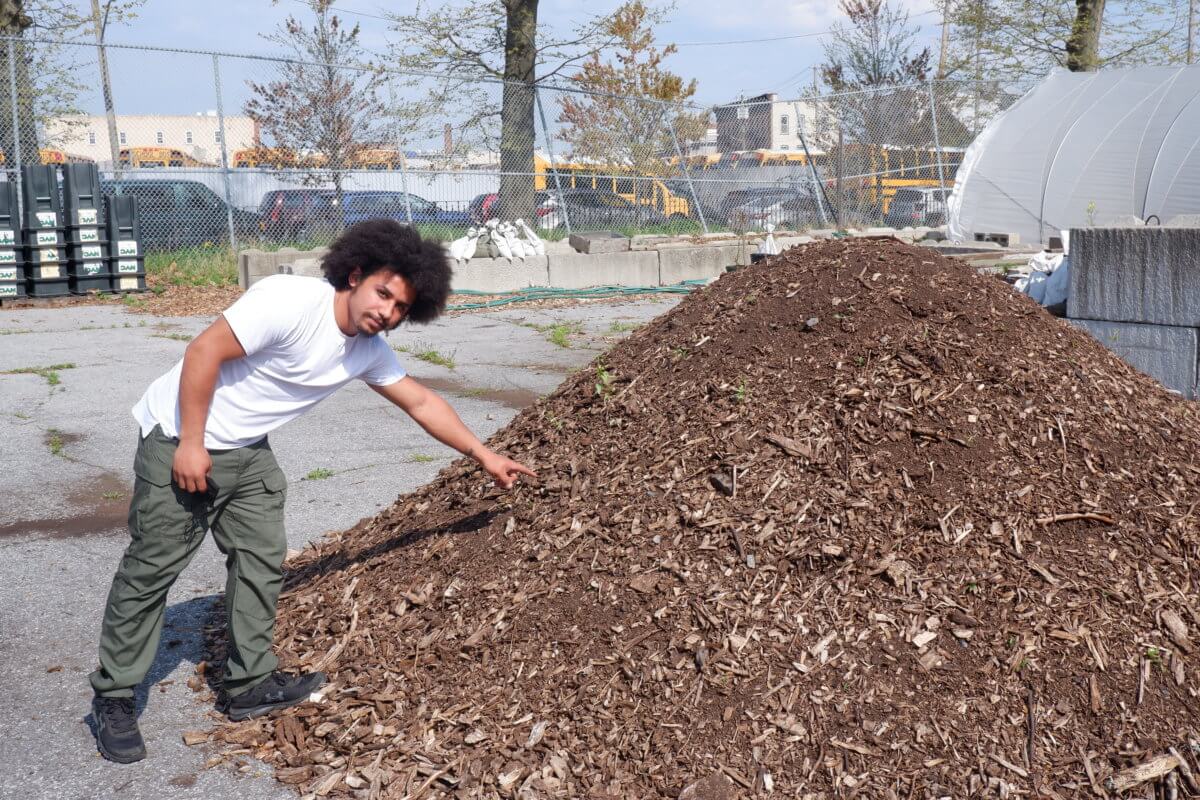 Domingo Morales of Compost Power stands next to a windrow of organic materials at Columbia Street Farm in Red Hook.
Photo by Kevin Duggan

“Curbside organics is essential service, we cannot afford to go backwards, go slowly, or continue to perpetrate environmental injustice,” said mayoral candidate and former Sanitation Commissioner Kathryn Garcia at the Columbia Street Farm on April 21. “The current mayor’s decision to cut curbside organics recycling was a mistake that set us back at a critical moment and demonstrates a lack of long-term commitment to the fight against climate change — it must be reversed.”

De Blasio scrapped the organics program as part of $160 million cuts to the Department of Sanitation amid COVID-19 budget woes last May, and officials currently don’t plan to bring back the brown bins until June 30, 2022.

Organics make up about 30 percent of residential waste in the city, and composting the materials can divert them from incinerators or landfills where, left to rot, they emit the harmful greenhouse gas methane, which is 25 times more potent than carbon dioxide.

Bushwick Councilmember Antonio Reynoso, who chairs the Council’s Sanitation Committee and is running for Brooklyn borough president, derided the program’s pause as “nonsense cuts” and said Hizzoner was quick to trash the valuable program.

“The mayor, when given an opportunity to make cuts to programs citywide, this was the first program he went after,” Reynoso said. “The mayor every step of the way undermined the work that we were doing.”

Launched under then-Mayor Michael Bloomberg in his final year in office in 2013, the program suffered a low participation rate under de Blasio’s management at just 10 percent in areas where it was available in early 2020 with little funding for advertising or education.

The Big Apple lags behind other major metropolises, such as San Francisco, where the city started requiring separation of recycling and organics back in 2009, leading to a diversion rate of 80 percent three years later — the highest of any city in the nation.

Pols called on Hizzoner to bring back the scraps collection, expand it to all parts of the Five Boroughs, and make it mandatory so that it becomes second nature to city-dwellers.

De Blasio balked at the idea of mandatory organics separation, but hinted at an update on organics in the near future.

“I think the question of mandatory to me is a challenging one in terms of what we can we can ask of people and what’s going to work, but we’re looking at all of those issues right now and we’re going to come out with some updates soon,” the mayor said at his daily press briefing Wednesday.

Other local efforts have tried to fill the gap left by the municipal cutbacks, such as community gardens, farms, and nonprofits.

The COVID cuts eliminated funding for efforts such as the composting program at the Columbia Street Farm near Halleck Street, the largest community composting program in the United States, which used to process more than 225 tons of organic materials a year.

One composting advocate said the initiative helped some of New York’s neediest in the nearby Red Hook Houses public housing projects learn more about the value of recycling food waste and environmental practices more broadly.

“It gives them the opportunity to have that life-turning moment where you’re at a composting site and you’re talking about solar panels, you’re talking about reducing water waste — it just starts the conversation of sustainability and that’s what these sites provide, it gives these residents that introduction,” said Domingo Morales, who helped manage composting efforts in Red Hook and runs the education initiative Compost Power. “We cannot achieve zero waste in New York City without severely investing in underserved minority communities.”