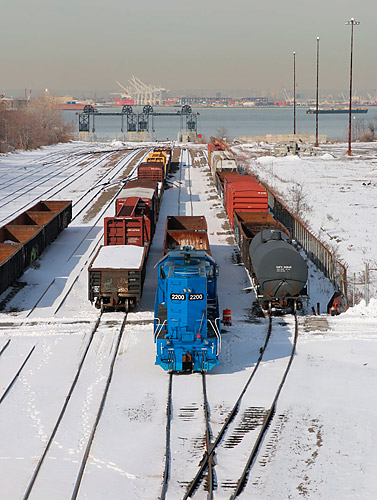 The Ridge isn’t on board with the Port Authority’s tunnel vision.

Bay Ridge’s community board will not support any of the authority’s proposals to improve cross harbor shipping, because all the plans would burdens on the neighborhood, but the Port Authority can’t say how great those burdens could be.

“Looking at the different alternatives, it does seem like we’re going to be the hub,” said Community Board 10 transportation committee chairwoman Jaynemarie Capetanakis at a March 16 meeting. “It’s something that could potentially change the fabric of the community, so until we have more specific information, we cannot endorse anything at this time.”

The authority has floated 10 different plans to bring more cargo directly across the harbor from New Jersey into Brooklyn, by rail or boat. But every proposal makes use of the 65th Street Rail Yards, and could bring anywhere between a dozen and several hundred trucks to the area on a daily basis.

Port Authority representatives haven’t been able to answer residents’ questions about where the trucks would be going, how much noise trains would make, or how far their vibrations will travel.

A cross-harbor rail tunnel could be the most disruptive infrastructure project in Bay Ridge since Bob Moses plowed under 800 homes and businesses to build a ramp for the Verrazano-Narrows Bridge, board members said.

“This is probably the biggest thing this community has ever faced,” said CB10 chairman Brian Kieran.

The board filed a formal response to the Port Authority’s plans on March 19 — endorsing no proposal but singling out five it would like the authority to investigate further in subsequent impact studies — two options for floating cargo across the harbor, two tunnel options, and doing nothing at all.

But the committee is leaning toward the cheapest alternatives that would bring the fewest number of trucks to Bay Ridge.

“Looking over the five float choices, two stood out for us — rail car float and truck float — which present the lowest tech and the lowest cost and make the best use of the systems available,” Capetanakis said.

Residents are split on whether the they support the Port Authority’s push to bolster cross-harbor shipping, but many consider it a fait accompli that the Authority will enact some plan. But not longtime board member Allen Bortnick — architect of the “Bortnick Plan” to enhance pedestrian safety at the intersection of 86th Street and Fourth Avenue — who suggested the Port Authority 86 the tunnel plan and instead entice truckers to use existing crossings by lowering tolls overnight.

Other board members said that plan would create problems of its own, including necessitating a staging area where trucks could wait out the higher-toll peak hours.

A Port Authority spokesman said the authority is not considering new plans.

The bi-state agency stopped collecting public comment on its plans on March 20, and it plans to use the responses it received to pare down its list of proposals before a deeper environmental-impact review of the remainder this summer, according to a Port Authority spokesman.