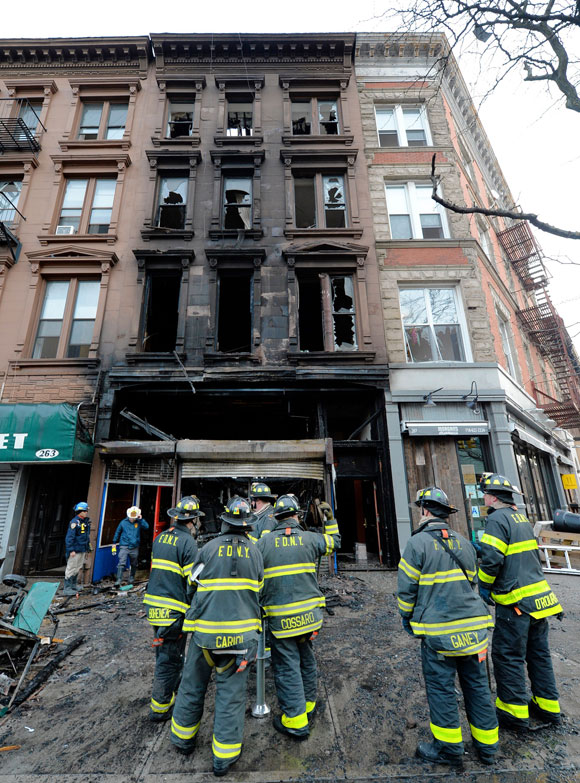 Smoldering ruin: Firefighters survey the damage at 265 Flatbush Ave., where a fire gutted the building and left a 46-year-old dead.
Photo by Paul Martinka

One man died and 18 people were injured, four of them seriously, when flames tore through an apartment building on Flatbush Avenue in Prospect Heights, according to a Fire Department spokesman.

Relatives of the man, who they identified as 46-year-old Bassam Awad, told reporters at the scene that Awad jumped from his fourth-floor apartment to escape the flames.

Firefighters responded to a 911 call reporting a fire at the building between Saint Marks and Sixth avenues at 3:28 am on Wednesday and found the inferno engulfing the four-story building, the FDNY spokesman said. One hundred ninety-eight firefighters battled the blaze and didn’t get it under control until around 8:30 am, he said.

Responders found Awad unresponsive in the rear of the building, and declared him dead at the scene, according to a police account.

The building was severely damaged, and appeared gutted by fire from top to bottom on Wednesday morning, but buildings next door were left relatively unscathed.

“We definitely got very lucky,” said Justin Eagle, a manager at Morgan’s Barbecue, an adjacent business that only suffered minor water damage. “They did an amazing job containing the fire.”

The fire was caused by one of the ground-floor Flatbush Hardware Company’s neon signs, according to the official FDNY Twitter account.

Eagle said the beginning of the fire was captured on surveillance footage, and that it started with a blast.

“The fire starts at about 3:26 and it went up pretty fast,” he said. “There was definitely some sort of small explosion and there were constant flashes and debris shooting out.”

The building contained three residential floors above the hardware store. Cleaning up: Firefighters saw through wreckage at the scene of a deadly fire in Prospect Heights on Wednesday morning.
Photo by Paul Martinka Can you hear me now?: A fire official peers oout of a window of the ruined Prospect Heights building.
Photo by Paul Martinka Casing the joint: Arson investigators inspect the ground-floor hardware store where the fire appears to have started.
Photo by Paul Martinka Tangled: A pile of wreckage sits outside.
Photo by Jason Speakman 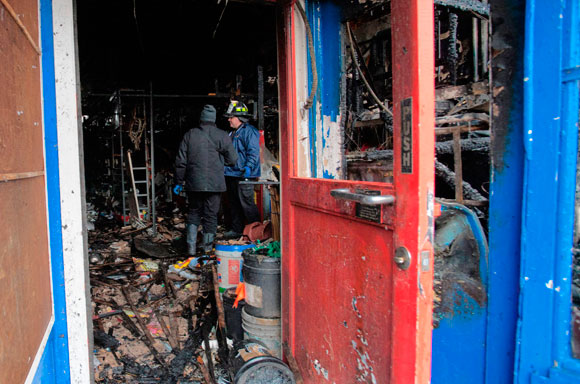 Ruins: Fire officials check out the inside.
Photo by Jason Speakman